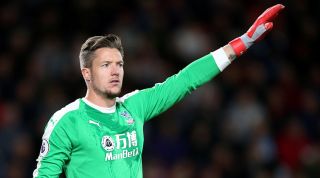 Hennessey was seen holding one hand in the air and the other above his mouth in a peculiar Instagram post on Sunday, which was later deleted.

After furore on social media, the Palace goalkeeper tried to smooth over his actions and tweeted: "Yesterday evening I had a meal with my team-mates and we had a group photograph," Hennessey wrote on Twitter on Sunday.

"I waved and shouted at the person taking the picture to get on with it and at the same time put my hand over my mouth to make the sound carry. It's been brought to my attention that frozen in a moment by the camera this looks like I am making a completely inappropriate type of salute. I can assure everyone I would never ever do that."

As if Aston Villa losing 6-0 to Liverpool in February 2016 wasn't bad enough, experienced centre-back Joleon Lescott managed to make it worse by tweeting a picture of a flash Mercedes post-match.

After apologising to Villa fans for the team's latest hapless display, Lescott added an apology for his ill-advised motor posting. "I would like to add that the tweet sent out from my account involving a picture of a car was totally accidental it happened whilst I was driving and my phone was in my pocket."

Clearly, those pesky gremlins have nailed the four-step process to tweeting. Clever sods.

If you’re going to lie about cheating on your missus, make a better fist of it than Peruvian top-flight pair Carlos Flores and Jose Carranza. The latter, a midfielder for Universitario, claimed he was abducted in 2003, while his wife Carmen was seven months pregnant, but had actually been with cheerleader Shirley Cherres (“It looked like he enjoyed his kidnapping to me,” cheered Cherres).

Six years later, CNI midfielder Flores was found tired, emotional, bleeding and naked in the street, claiming he was being chased by a ghost. He later admitted: “I made up the poltergeist; I didn’t want my wife to find out I was partying with some fitties.” Dignity saved...

There was only one logical explanation for Ukraine’s 4-0 defeat to Spain at the 2006 World Cup in Germany. “Because of the frogs’ croaking,” squealed defender Vladislav Vashchuk after a restless night at the Seminaris Seehotel in Potsdam. “We hardly got a wink of sleep.”

“There are also birds near our lake,” huffed a disgruntled hotel spokeswoman. “In the morning they wake up and start cheeping. Should we go and catch all the birds?” Probably not.

Tomas Brolin had bird woes of his own. On his way to catch a Yorkshire-bound flight for the start of Leeds’ pre-season in June 1997, the heavy-set playmaker’s car hit a feathered foe, breaking his windscreen and leaving him too distraught to go any further (and denying rumours he ate it).

Pictures of the damage – first thought to be the work of an elk – surfaced in the Swedish press, while a fuming George Graham left him out of the official team photo.

BIG INTERVIEW Tomas Brolin – "I was bullied at Leeds, but I don't regret joining them"

Mooney rubs in the bald truth

Ex-Rotherham keeper Chris Mooney’s rationalisation for letting a shot trickle between his legs has gone down in Millers folklore. A common complaint of the follicly challenged Mooney claimed he was blinded by the sun reflecting off the bald bonce of centre-half Nick Smith. Slap!

Too famous to be banned

In February 2015, Robbie Savage was clocked doing 99mph in his Bentley driving home from an Alan Shearer charity bash. Savage claimed he just wanted to get home to see his two sons, which is fair enough, but managed to avoid a ban by scarpering with six points and a £600 fine after his lawyer claimed the former Leicester midfielder was "regularly accosted in public" so couldn't use alternative transport.

But Savage isn't alone here. Three years earlier, then-Stoke boss Tony Pulis managed the same feat when he was caught motoring at 96mph on a 60mph road. It took the cap-donning Baggies boss up to 15 points on his licence but he escaped a ban and was fined £2,585 instead. Why? Wait for it: Pulis argued he couldn't use a chaffeur because his telephone conversations needed to remain private.

“There are numerous phone calls every day between Mr Pulis and the chairman which are totally confidential,” argued Pulis's lawyer. “That has contributed to the success of the football club. As a result of being in the Premier League it has put Stoke-on-Trent on the map.

“It has led to numerous businesses being set up. A number of them are totally reliant on Stoke City, and those businesses would suffer if they were relegated. The people of Stoke-on-Trent could suffer if Mr Pulis lost his licence and lost his job.”

After labouring to a 1-1 draw at Stevenage in the FA Cup third round in 1998, Newcastle boss Kenny Dalglish explained why Alan Shearer et al had failed to beat a non-league side whose on-loan centre-forward Giuliano Grazioli was allegedly recruited for three packets of crisps and a Mars bar. “The balls were too bouncy” remains a triumphant moment for self-denial.

Acquitted of driving illegally down the hard shoulder in 1999, Sir Alex Ferguson claimed his actions were an “emergency” because he was suffering from acute diarrhoea. “When I got on the M602 I started to feel the cramps again,” wailed the Manchester United boss in court (that’s cramps, with an ‘m’). Well, it’s more passable than ‘invisible’ grey kits.

Wish I was a little bit taller

Gordon Strachan knew exactly why Scotland failed to qualify for the 2018 World Cup: genetics. Of course!

"Genetically we are behind," Strachan sighed. "In the last campaign we were the second smallest, apart from Spain.

"We had to pick a team to combat the height and strength at set-plays. Genetically we have to work at things, maybe we get big women and men together and see what we can do. But it's a problem for us because we have to fight harder for every ball and jump higher than anyone else."

Spain, of course, have famously never won anything. Right on, Gordon.

The closest Sutton has got to a commotion, apart from the odd episode of The Bill, was that famous 1989 FA Cup win over top-flight Coventry. The fans made a racket that day – yet when Sutton United striker Adrian Bradnam missed a sitter in a different match, he blamed the fans for being too noisy. Spoilsport.

When you’re the chairman of a football club, hiring and firing employees is your responsibility, right? Not if you’re former Southampton chief Rupert Lowe, who blamed “a constant stream of negative and unfair media coverage” for his own decision to sack manager Paul Sturrock two games into the 2004/05 season.

“Those people responsible for perpetrating this unsatisfactory situation should take a long hard look at themselves,” harrumphed the mirror-less Lowe.

“The thread of the socks is too rough”

In football, feet are important – there's no denying that. But Italy’s unhappy players took things a bit far following an insipid Euro 2004 goalless draw with Denmark in 34-degree heat. “It was like having your feet on boiling sand,” wailed Francesco Totti, while Christian Panucci complained: “The thread of the socks is too rough.”

Trust Alessandro Nesta to be sensible: “They’re going to take us for being ridiculous,” he said. “Totti is so good he could play barefoot.” Just not in the desert, apparently.

"You wouldn’t tackle a man in glasses..."

Scoring the winner in the 1970 Intercontinental Cup Final was bespectacled Feyenoord defender Joop van Daele’s finest moment, but it came at a cost: Estudiantes’s Oscar Malbernat stamped Van Daele’s glasses to bits. Malbernat’s excuse for this show of petulance? “You shouldn’t play football in glasses – not in South America.” Oh.