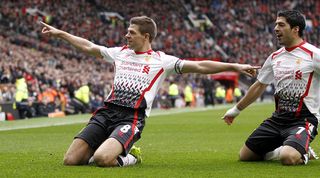 “When you do that with footballers like he [Alex Ferguson] said about Leeds… I’ve kept really quiet but I’ll tell you something, he went down in my estimation when he said that,” a wide-eyed, finger-jabbing Kevin Keegan told Sky Sports after his Newcastle team’s 1-0 victory at Elland Road in the run-in.

“We have not resorted to that. But I’ll tell you, you can tell him now if you’re watching it, we’re still fighting for this title and he’s got to go to Middlesbrough and get something. And I’ll tell you, honestly, I will love it if we beat them. Love it.”

Beat them they did not, but Newcastle were a fine side in 1995/96. A team featuring Les Ferdinand, Peter Beardsley and David Ginola played some exhilarating, attacking football, as the Magpies flew out of the traps and won nine of their first 10 matches. By January, they had opened up a 12-point lead at the top and looked almost certain to win their first league championship since 1927.

Manchester United had other ideas, though, and were pretty much unstoppable after beating West Ham 1-0 in January. The Red Devils’ final 15 games brought 13 wins and a draw, while Keegan’s men lost five and drew three in the same period. A lack of title-winning experience ultimately cost them, but few Premier League sides have been as thrilling to watch in full flow.

There was little in Liverpool’s opening 13 matches to suggest they would go on to be favourites to win the league with just a few weeks of the season remaining. Three consecutive 1-0 wins against Stoke, Aston Villa and Manchester United certainly represented a positive start but by the start of December, the Reds were seven points off the pace having lost to Southampton, Arsenal and Hull.

But then everything seemed to click, and Norwich (5-1), West Ham (4-1), Tottenham (5-0) and Cardiff (3-1) were all blown away by Brendan Rodgers’ side. They were suspect defensively (they conceded a total of 50 goals) but - with an intoxicating front three of Luis Suarez, Daniel Sturridge and Raheem Sterling - scintillating going forward, as they scored 101. Their progress was checked by back-to-back losses to Manchester City and Chelsea, but Liverpool roared back and were looking down at the rest of the division from the summit of the standings by the end of March.

A 3-2 triumph over closest challengers City put the Merseysiders in pole position to claim their first league title since 1990, but a 2-0 defeat by Chelsea and 3-3 draw with Crystal Palace – in which a three-goal lead was inexplicably squandered against opponents with nothing left to play for – allowed Manuel Pellegrini’s Manchester City to snatch the prize on the final day.

Liverpool actually racked up more points in another close, second-place finish (under Rafael Benitez in 2008/09), but the sheer brilliance of Suarez means this iteration comes out on top.

Poor Avram Grant. The Israeli has become one of those names supporters desperately don’t want to hear linked with their club’s vacant managerial post, but things could have been so very different had Lady Luck been smiling on him in 2007/08 (although he probably wouldn’t have smiled back).

Chelsea failed to beat both Manchester United and Fulham in the two matches immediately after Jose Mourinho’s shock departure in September, which left them seven points behind table-toppers Arsenal, who also had a game in hand. From that point onwards, though, the Blues were brilliant: a narrow reverse to the Gunners in December was their only other defeat that season, as Grant’s charges won 22 of their remaining 30 matches to shoot up the standings.

Unfortunately for Chelsea, an impressive return of 85 points wasn’t quite enough to overhaul Manchester United in first place, with the Red Devils ending the campaign two points clear of the west Londoners, who themselves finished a couple ahead of Arsenal. United also got the better of Chelsea in the Champions League final in Moscow, where John Terry’s slip denied him the chance to score the winning penalty kick in the shoot-out.

Grant, who has since bossed Portsmouth, West Ham, Partizan Belgrade and Ghana with minimal success, was left to ponder what might have been.

You probably won’t believe us, kids, but there was once a time when Arsenal supporters were united in unbounded love and adoration for the club’s forward-thinking, innovative and thoroughly modern manager Arsene Wenger. The Frenchman won the double in his first full season in north London, but was beaten to both the Premier League and FA Cup by Manchester United – who also claimed the Champions League in Barcelona – the following year.

A tally of 78 points in 1998/99 compares unfavourably to 2004/05, when a Gunners squad containing Thierry Henry, Robert Pires, Ashley Cole and Freddie Ljungberg (as well as Justin Hoyte, Jermaine Pennant and Quincy Owusu-Abeyie) amassed 83. Yet while that post-Invincibles team finished a whole 12 points behind eventual winners Chelsea, the Arsenal of 1998/99 ended the campaign just a single point shy of United.

They may not have scored as many goals (59 vs 87), but the 98/99 Arsenal, who had a fearsome spine of David Seaman, Tony Adams, Patrick Vieira and Dennis Bergkamp to call upon, were tougher to beat. They conceded just 17 times all league season – and had a superior record against their closest rivals.

Indeed, whereas the 2004/05 Arsenal fluffed their lines against Chelsea (two draws), United (two defeats) and Liverpool (one defeat, one win), they were far stronger against equivalent opposition in 1998/99, with their only loss to a team who can loosely be described as a rival coming against Leeds in May. That setback proved to be pivotal, though, as United squeezed over the line in first place.

The shoe was on the other foot for Alex Ferguson’s side 13 years later, when United recorded the highest ever 38-game top-flight points tally of any non-title winner in England.

The defending champions began the season with five successive successes against West Brom (2-1), Everton (3-0), Arsenal (8-2), Bolton (5-0) and Chelsea (3-0), but a 6-1 shellacking by noisy neighbours Manchester City saw them drop to second in October. That’s where they remained for the best part of five months, before City had a wobble and emerged victorious from only one of five matches against Swansea, Chelsea, Stoke, Sunderland and Arsenal.

From hat-tricks to handbags: what are the origins of the strange language of football?

How to win the play-offs: late charges, relegation-form winners and 20% chaos

Rafinha exclusive: "I have a few offers from Premier League clubs"

United’s comparative consistency saw them open up an eight-point lead at the top, but they inexplicably contrived to throw it all away in the final six fixtures of the campaign. Losing 1-0 to both Wigan and City proved fatal, but perhaps the most significant result was a 4-4 draw at home to Everton, which gave Roberto Mancini’s men renewed hope ahead of the upcoming derby.

Manchester United still had a chance to capture the trophy on the final day, but Sergio Aguero’s last-gasp intervention against QPR snatched it away from them in the most dramatic fashion possible.

It is scant consolation to United supporters, but a return of 89 points would have been good enough to win any title since. Four wins from their last four games would see Mauricio Pochettino's Tottenham equal it.