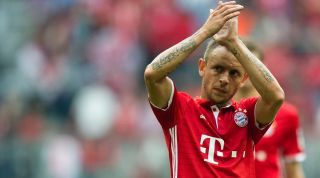 The Brazilian has only started nine games in the Bundesliga this term and, with his contract set to expire in 2018, could leave the Allianz Arena this summer.

Serie A champions-elect Juventus have also been linked with the 31-year-old, but Rafinha has confirmed that he has received concrete proposals from English sides.

"I don't like to talk about offers – I have managers for that. But it's true, those offers are real," he told FFT in an exclusive interview. "I have a few offers from Premier League clubs.

"I'd rather not say [which clubs] because it's confidential. I’m playing for Bayern Munich, one of the greatest clubs in Europe. I’m very happy here, but I am also happy to know that there are other clubs interested in my work.

"It's not the first time that something like that has happened. Obviously, every player is fascinated by the Champions League. I would like to learn another language. Why not?

"I always follow the Premier League matches. It’s very exciting watching a tournament where six or seven teams can fight for the title. It’s probably the best league in the world."

Rafinha has spent the majority of his European career in Germany, first with Schalke and then with Bayern, but says he would not be fazed by the speed of the Premier League.

"It’s very physical, but that wouldn’t be a problem for me.  When I first arrived in Germany I was 18 years old and players at Schalke were like 6ft 4in. The defenders were even taller than that and I was the skinny one weighing just 60kg. I had to learn how to avoid contact otherwise I wouldn’t make it. So I always tried to anticipate what was happening in the pitch. Therefore, I wouldn’t be scared of this physical game."

Despite talk of a move to England, Rafinha conceded that he's still not sure where he will be playing his football in 2017/18.

"It’s a surprise for me [to be heavily linked with a transfer] because I still have one year left in my current contract. I've played for Bayern for the last six years, and I’ve been in Germany for 12 years now. I know the Bundesliga so well and, luckily, I had a victorious career in this country.

There could be wholesale changes in Bavaria this summer, with Xabi Alonso set to join Bayern stalwart Philipp Lahm in hanging up his boots.

"I am sad that Philipp will retire," Rafinha says of his team-mate. "I was glad to be his immediate reserve because in my opinion he was the best full-back in football’s history.

"But even in this situation I managed to play more than 200 matches for this club, and no one plays more than 200 for Bayern out of nothing. It certainly wasn’t because I’m good looking!

"I would like to start in more matches now that Philipp is retiring."