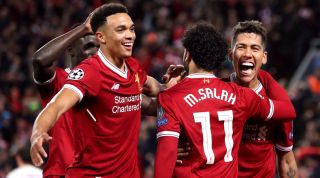 It's been a very positive summer for Liverpool, who have wasted no time moving on from their Champions League final defeat in late May. Signing Brazilian midfielder Fabinho within 48 hours of that night in Kiev moved thoughts swiftly to the future, rather than wallowing in what might have been. The mood has remained upbeat on the red half of Merseyside.

The shrewd acquisition of Xherdan Shaqiri for £13.5m has added depth in attack, while the capture of Alisson in goal has given Jurgen Klopp’s side the appearance of being strong in all areas. There are no glaring weaknesses in the team, and the spine of the side looks extremely strong.

A title challenge is now what's expected, rather than hoped for: but what can we expect from Klopp’s side in 2018/19?

Last season marked the first time since 2009/10 that Liverpool leaked fewer than 40 goals in the Premier League – remarkable for a club with ambitions to win the title. Incredibly, after the Reds’ 4-1 thrashing at the hands of Tottenham last October, they boasted the best defensive record in the Premier League over the remainder of the season (22 goals conceded in 29 games; Manchester City shipped 23).

The arrival of Virgil van Dijk helped massively, especially as the Dutchman formed a strong partnership with Dejan Lovren and seemingly got the best out of the oft-maligned Croatian. This season, with Van Dijk now firmly established and a full pre-season behind him, Liverpool should carry that kind of strong defensive work through a full campaign – especially with Alisson in goal.

The additions of dynamic midfielders Fabinho and Naby Keita will also help; the former is likely to play a deep-lying role, forming a steely defensive triumvirate in front of Alisson. Keita, with his ability to win possession high up the pitch and turn the ball over in midfield, will add another defensive screen further upfield, stopping attacks before they become deadly.

Liverpool haven’t conceded fewer than 40 goals in consecutive seasons since Rafa Benitez left the club, but they will surely do so now under Klopp. Indeed, under Benitez they went four years in a row conceding fewer than 30 league goals. Achieving that figure this season would massively aid a title push.

It’s unlikely that Salah will match his record-breaking achievements of last season, though: the goals could be shared around more with the additions of Keita and Shaqiri, plus Van Dijk’s threat from set-pieces.

Yet with Keita's ability to play chipped balls in behind from midfield, and Alisson providing improved distribution, supply for the front three should only improve this season. Provided that none of the trio suffer a long-term injury, all will hit 20 goals this season.

The real aim for Liverpool this season must be securing that elusive Premier League title. Most expect Klopp’s side to be the ones who run Manchester City closest.

Whether they can stop Pep Guardiola’s side becoming the first team since Manchester United in 2007/08 and 2008/09 to win back-to-back league titles will depend on two things: firstly, whether Manchester City can reproduce their unprecedented form of last season, and secondly whether Liverpool can perform consistently over a 38-game campaign.

Last season, too many stalemates proved costly – the Reds' 12 draws were at least four more than any other side in the top six. Those draws need to be turned into victories if they're to improve on the 75 points of 2017/18.

Not since Brendan Rodgers’ entertaining side of 2013/14 have Liverpool been in the title hunt going into the final weeks of the season, but we should expect them to be in with a shout this time. If they are, the Reds face a favourable final four fixtures against Cardiff, Huddersfield, Newcastle and Wolves.

4. A Champions League quarter-final (at least)

Few foresaw Liverpool’s run to the Champions League final last season, but given their ability to blow away any side in Europe with Klopp’s high-energy, exhilarating football, it shouldn’t have been such a surprise.

With additional strength in depth and experience in the squad following that run to Kiev, Liverpool will fear nobody in Europe this season. Not since 2009 have they made it to the final eight of the Champions League in consecutive seasons, but they have good prospects of making it happen again a decade on.

Alisson: Liverpool's world-record new goalkeeper "who can define an era"

Liverpool scored goals for fun last season but many of their biggest wins came in Europe, where they hit at least five goals against every side they faced, bar Real Madrid in the final.

Even in the Premier League, 84 goals wasn’t a bad record; only Manchester City, with 106, struck more. The next closest team was Tottenham, with 10 fewer than Klopp’s side.

Yet there’s room for improvement. The midfield five of Jordan Henderson, Emre Can, Gini Wijnaldum, James Milner and Alex Oxlade-Chamberlain only scored eight goals between them in the Premier League. Elsewhere, Keita got six in the Bundesliga and Fabinho seven in Ligue 1.

Then there’s Shaqiri, who was Stoke’s top scorer with eight, plus a seemingly revitalised Daniel Sturridge – who will surely score more than the solitary effort that Dominic Solanke provided last term. Liverpool look well set to hit more than 90 goals. They could even get close to the 101 that they managed in 2013/14.