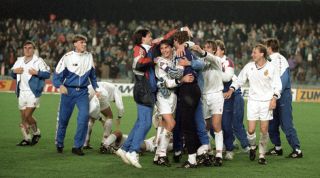 Few football matches have been played under more dramatic circumstances. Honved were among the favourites to lift the 1957 trophy – after all, these were the Mighty Magyars of Ferenc Puskas, Sandor Kocsis and Zoltan Czibor.

But in November 1956, Soviet tanks rolled into Budapest to quell the Hungarian Uprising. Now the Honved players, on tour in the west to prepare for the away leg in Bilbao, couldn’t return home and didn’t know if their loved ones were safe.

Unsurprisingly, they lost 3-2 in Spain. Honved’s ‘home’ leg was staged in Brussels, where more mishap befell them: Czibor injured his hip, then keeper Farago Lajos broke his cheekbone and had to come off. The limping Czibor went between the sticks.

Down to 10 men and with an outfield player in goal, Honved fell 3-1 behind, but the greatest team of its generation rallied together for one last hurrah: Laszlo Budai pulled one back and then Puskas headed the equaliser. Honved tried everything to score the winner that would’ve forced a play-off, but the Basques held on.

Real Madrid’s 7-3 victory over Eintracht Frankfurt at Hampden Park in 1960 is more celebrated, but this game was the better final because it was close, thrilling and symbolic. On what came to be known as The Night Of The Long Shots, an ageing Madrid team tried to wrestle back the trophy they had won in five of the preceding six years from the young and enthusiastic Portuguese outfit.

And they came close. Puskas scored a hat-trick in the first half and the Spaniards held a 3-2 lead at the interval.

But Mario Coluna equalised with a 30-yarder, before the pace and power of a young Eusebio decided the game, as he put Benfica ahead from the spot and added a fifth from a free-kick. At the final whistle, fans invaded the pitch and carried Eusebio on their shoulders.

Despite having the likes of George Best, Denis Law and Bobby Charlton among their number, the decisive goals in Manchester United’s semi-final victory over Real Madrid in 1968 came from two less heralded players. It was Best who gave United a 1-0 win in the first leg at Old Trafford, but Madrid raced into a 3-2 aggregate lead by half-time of the return leg in Spain thanks to goals from Pirri, Francisco Gento and Amancio Amaro.

Los Blancos looked set for yet another final but, with time running out, United centre-back David Sadler prodded in a flick-on from Best to level the scores and silence the Bernabeu crowd. Fellow defender Bill Foulkes then swept home a cross – Best again – to complete a dramatic turnaround and put United into the final.

It was one of only nine goals Foulkes scored in 688 matches for the club. “Nobody would have picked me and Bill,” Sadler recently said of the pair’s goalscoring heroics. “Charlton and Bestie, maybe, but if you’d got the two of us in the sweepstakes you’d have been disappointed!” Not for long.

One Swiss paper later called this match “90 minutes of lawless football”. After less than half an hour, the hosts were trailing the Belgians 2-1 (4-2 on aggregate), but only six minutes later Basel led 3-2 and needed one more goal to go through to the quarter-finals.

Lambert equalised again – but it didn’t dampen Swiss enthusiasm. Hitzfeld made it 5-4 and, just three minutes from time, sent Basel into the next round with a shot on the turn. Grinning like a Cheshire cat, midfielder Karl Odermatt said: “This was like the carnival!”

Games between sides from the two Germanys were always high-profile, not to mention emotionally and politically charged – even more so when Dynamo Berlin were involved, as they were seen as the club representing the East German regime (supported by Erich Mielke, head of the secret police).

The first leg was a disaster for Bremen: Dynamo won 3-0 and their fans chanted, “We are the champions of Germany”. In the return leg, however, Werder played like men possessed. A penalty, a spectacular volley from 20 yards and an opportunist Karl-Heinz Riedle strike erased the 3-0 deficit after 62 minutes.

A flying Manfred Burgsmuller header, 10 minutes from time, then made it 4-0. As the East Germans mounted desperate attacks, looking for the away goal that would have seen them through, Thomas Schaaf hit them on the break for the fifth goal of an electric night.

Almost 23 years later, it’s still hard to get to grips with this night. Barcelona were the holders. This was the original dream team masterminded by Johan Cruyff; the side of Ronald Koeman, Hristo Stoichkov, Michael Laudrup and Pep Guardiola. They came away from Moscow with a valuable 1-1 draw and then took a 2-0 lead at home in the first half-hour through a well-placed Miguel Angel Nadal header and a Txiki Begiristain solo run.

And yet Barça didn’t survive this second-round tie against a Russian team that went on to lose 6-0 in Marseille. How? Well, the Catalans failed to finish off the opposition (and had a penalty appeal turned down), and Yevgeni Bushmanov pulled one back out of the blue seconds before half-time.

Then, on 57 minutes, an unmarked Denis Mashkarin headed home from a corner. Now the hosts needed a goal, and surged forward. Suddenly they were outnumbered at the back, and Dmitri Karsakov put the finishing touch on one of the great shock results with a cheeky backheeler.

This feature originally appeared in the October 2015 issue of FourFourTwo.