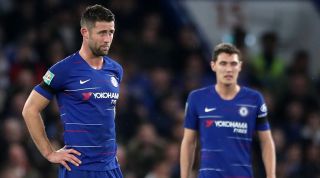 He was named man of the match against Newcastle United on Monday evening, but it felt like damnation through faint praise. Fourteen months after signing a deal to become the second-highest-paid player in the Premier League, Ozil has become the star of Arsenal’s ‘B’ fixtures. That wasn’t the plan.

Ozil has perennially suffered through accusations that he either doesn’t care enough or doesn’t try enough. He isn't a player in whom you can see the cogs whirring and the pistons pushing. Instead Ozil is a luxury item, and so the focus often shifts onto what he can’t do rather than what he can.

For Unai Emery, looking to rid Arsenal of their fairweather team reputation, Ozil has been the high-profile fall guy. He might have started 16 of Arsenal’s 31 Premier League games, but scratch the surface a little to reveal the truth: Ozil has started two away league games since September. Consider Manchester United (a), Manchester United (h), Tottenham (h), Tottenham (a), Liverpool (a), Chelsea (h), Manchester City (a); not one start between them.

QUALITY FOR A QUID

When February clicked into March, Valencia knew his time at Old Trafford was up. It signalled that the deadline had passed for Manchester United to take up their option to extend his contract. Valencia accepted that his club was looking to the future and that he was fading into the past.

This isn’t how he wanted it to end. Valencia has been a wonderful servant to Manchester United, particularly having been converted to a full-back, but has suffered three separate injuries this season to calf and knee. In between, he played four Premier League games under Jose Mourinho but only one under Ole Gunnar Solskjaer. Ashley Young has switched to the right to fill in, with Diogo Dalot his deputy. The only remaining hope is that United give him a fitting send-off.

Worth lumping in together, given their almost total absence from Maurizio Sarri’s plans. Chelsea’s manager might be under severe pressure from supporters who have grown sick of the sluggish, uninspiring football, but you couldn’t accuse Sarri of not making wholesale changes.

In 2017/18, when Chelsea limped to sixth, Victor Moses, Cahill, Christensen, Cesc Fabregas, Tiemoue Bakayoko and Alvaro Morata all started more than 20 league games. Four of those six have left the club on loan or permanent deals. The other two have been left on the central defender shelf and are gathering dust.

With Sarri preferring a back four to Antonio Conte’s three-man central defence, Cahill was always likely to miss out. But the resurgence of David Luiz has cost Christensen his first-team place and angered his father. The chances of both leaving this summer are surely high.

NEXT: When injury costs you dearly...

By January, Pope had played in an FA Cup tie against Barnsley, and he immediately stated his intention to get back into Gareth Southgate’s England squad. Unfortunately, a single FA Cup defeat against Manchester City represent his only minutes since. With Tom Heaton now re-established as Dyche’s No.1 (and back in the England fold himself) and Hart dropping to the bench, Pope is caught in purgatory. Another crisis for the Catholic church.

Ranked! The 8 worst Premier League signings of the season

The 20 best ever Premier League teams by points total

Baines isn’t dim; he saw this coming. When Everton signed Lucas Digne from Barcelona, it was abundantly clear that he would become Marco Silva’s first-choice left-back. Approaching the age of 34, Baines could no longer maraud forward and still maintain his defensive positioning, so Everton were due a change. But there’s still something a little sad about Baines playing fewer than 400 league minutes this season. His decline is a stark reminder that we’re all getting bloody old.

A nice touch from a new manager to an old pro, and an option that Baines may take to see out his career at Goodison. He has earned that loyalty.

Last week, Goal.com’s Manchester City correspondent Sam Lee wrote that Otamendi would be open to leaving the club this summer if he received a suitable offer for regular first-team football. Now 31, Otamendi understandably wants to be playing every week and reasons that Aymeric Laporte and John Stones will take some shifting when fit.

Otamendi was reportedly at pains to stress that he is not actively seeking a move, but this does represent a significant fall from grace. He only signed a new contract extension last January, and no Manchester City defender started more matches or played more minutes during their record-breaking title assault last season.

Five City players were named in the PFA Team of the Year last season: David Silva, Sergio Aguero, Kyle Walker, Kevin De Bruyne and Otamendi. Four of those are still automatic picks. The other has been forced into the fringes of the first-team squad, and suddenly looks a little out of place.

FEATURE Overpaid and underplayed: what Mesut Ozil and Alexis Sanchez tell us about football’s market problem