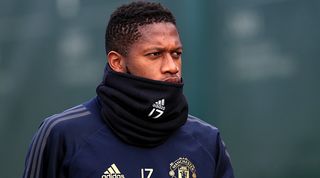 The outstanding candidate for this list, Pogba has struggled to express himself under Mourinho’s instruction and could be given a new lease of life under new management. Upon news of his manager's departure, the Frenchman took to Instagram with a mischievous smirk and the accompanying message of "caption this" (later said to have been pre-scheduled, but you're fooling no one, Paul).

Much of it is on him, however. United fans have long been waiting for the 25-year-old to justify the £89m fee that their club forked out for his signature two-and-a-half years ago.

The France World Cup winner’s relationship with Mourinho was stormy to say the least, culminating with Pogba being benched for the final two league games of the Portuguese’s tenure.

Lukaku appears to have been struck by a crisis of confidence this season, scoring just six league goals so far and often appearing isolated in a lone striker role; he failed to fire a single shot at Liverpool's goal in Mourinho’s final match last weekend, but has generally looked out of sorts all season.

A new manager could be what’s needed to structure a side that can get the best out of the Belgian, who has shown in previous seasons just how prolific he can be in the Premier League.

The No.9 will be key to United rediscovering some swagger, and a less defensive strategy with more support would surely help him achieve that.

Another player to have endured a topsy-turvy relationship with Mourinho, and the souring of their rapport almost led to Martial leaving the club over the summer.

The 23-year-old did find his form towards the end of the former Chelsea manager’s tenure, scoring seven league goals in his last nine appearances, but the reaction of his cousin on social media to the news of Mourinho’s sacking said a lot about the relationship.

“Smile on my face,” Jema Martial posted on Twitter.

Shaw will perhaps be more relieved than anyone to see the back of Mourinho, after being the subject of conflicting behaviour from the Portuguese since making his comeback from a long-term injury.

The relationship appeared to have been repaired somewhat this season, but the left-back still admitted recently that "you need a thick skin to play under this manager and for this club".

The 23-year-old has now outlasted Mourinho and can look ahead to getting his career back on track at Old Trafford without the threat of the outgoing boss's ire.

Manchester United Sanchez has been a shadow of the Arsenal Sanchez for most of the year he's spent at Old Trafford, with injury problems and poor form plaguing his time at the club to date.

Like much of United's squad, the Chilean looks like he could benefit from new life at Old Trafford if nothing else, and at the age of 29 should still have a lot to offer the Red Devils.

Sanchez’s talent is undeniable, and although Mourinho can’t be blamed solely for the former Barcelona man’s struggles, a new dawn could reinvigorate the forward when he regains fitness.

It’s impossible to say if Rashford would have progressed any faster under a different manager, but it seems fair to say that one of English football’s brightest talents has struggled for consistency in recent seasons.

The England forward was one of United’s young talents, along with Luke Shaw, Anthony Martial and Jesse Lingard, to be criticised for ‘lacking maturity’ by Mourinho.

Perhaps the 21-year-old can now prove Mourinho wrong as he looks to add to his three Premier League goals this season and kick on.

Nobody should be more baffled by Mourinho’s continual complaints about his club's transfer activity than Fred. The Brazilian arrived for £52m over the summer – the fifth-highest transfer in the club’s history, and Mourinho's third-most expensive signing ever – only to be confined to the substitute’s bench for the majority of the season.

Fred has expressed his frustrations at the lack of game time, with just eight league appearances to his name so far this tern, and might now get the chance to repay the vast sum United splashed out for him under new management.

"When the team is defensively stronger I think the horizons for Fred change completely," Mourinho said almost a fortnight ago.

The full-back’s name has popped up in the Italian press frequently since he hinted at a return by saying earlier this month that he misses his home country.

But Tuesday’s developments may well change things for the 29-year-old, who was marginalised this season by Mourinho and had played only four times.

United fans might have already made their minds up by now about what the defender can offer, but the opportunity to showcase his ability under a new manager will hand Darmian and other players on the periphery a huge chance to come in from the cold.

How Jose Mourinho became the manager he used to mock

Rojo is believed to be one of a small handful of players who remained loyal to Mourinho until the end, despite his limited opportunities under the manager.

The Argentina international started the campaign with a knee injury, but had recovered by the end of September and has since gone on to make just two appearances in the league.

United’s defence has been far from watertight so far this season and Rojo could be another player, like Darmian, who can fight to regain his place and prove what he can offer to a new boss.