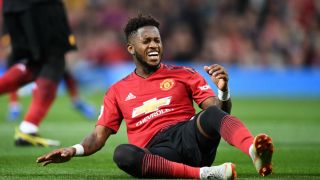 Manchester United need to be stronger defensively for Brazilian midfielder Fred to shine, according to Jose Mourinho.

Fred arrived at Old Trafford in June for a reported £52million and was viewed as the box-to-box midfielder United needed to help them dominate games both in the Premier League and Champions League.

His performances for Shakhtar Donetsk had seen him linked with a host of Europe's top clubs, but the lure of playing for United drew him to Old Trafford.

The 25-year-old has struggled to adapt, though, and he has been limited to just 10 appearances in all competitions despite United failing to hit the heights of last season.

And Mourinho insisted Fred's lack of game time will only be rectified once United can provide a solid platform for him to build from.

"[We are taking it] step by step," Mourinho said when asked about Fred in Friday's media conference.

"You have other players at other clubs that needed time and some of them played even less than what Fred is playing.

"When the team is defensively stronger I think the horizons for Fred change completely."