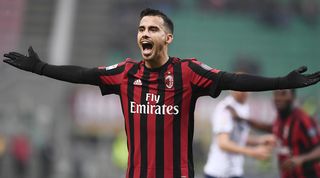 Signing another left wing-back should be a priority for Chelsea, who currently have no natural cover for Marcos Alonso. Not much was expected of the former Bolton and Sunderland man when he arrived at Stamford Bridge in 2016, but the Spaniard has exceeded expectations and become an essential part of the Blues’ attacking unit.

Question marks remain about his defensive capabilities, but even if Alonso is to remain first choice going into February, Chelsea need another option on that flank. Asamoah, whose contract expires at the end of June, would bring dynamism and intelligence to the role, while the Ghanian can also play in midfield if required.

Suso has been a rare bright spot for Milan in a dismal first half of the 2017/18 campaign, picking up from where he left off last season and looking completely unrecognisable from the player who struggled to make an impact at Liverpool. Able to play anywhere across the frontline, he’s adept at both creating and converting chances, with 12 league goals and 12 assists to his name since the start of 2016/17.

The 24-year-old signed a new contract at San Siro last year, but Milan are in a tricky financial situation and may be forced to part with one or two of their star men this month. Perhaps only goalkeeper Gianluigi Donnarumma would fetch a larger fee than the Spaniard.

After a prolific start to his Chelsea career, Alvaro Morata has been wasteful in front of goal for a few weeks now. Antonio Conte is clearly reluctant to rest the Spaniard and bring in Michy Batshuayi, however, which means it would be worthwhile acquiring another centre-forward in January.

Celtic won’t want to lose Dembele midway through the campaign, even if they’re strong enough to win the Premiership without him. Likened to Romelu Lukaku by former Bhoys midfielder Stiliyan Petrov, the 21-year-old striker is a lethal finisher inside the penalty area and could be worth pursuing.

The official reason for David Luiz’s absence from the Chelsea first team is a knee injury, with Conte recently inviting sceptical journalists to confirm the defender’s ailment with the club’s medical staff. The relationship between Conte and the Brazilian certainly appears strained, though, and it wouldn’t be a surprise if Luiz sought pastures new in the coming weeks.

If he does depart, Tah would be a fine replacement. The 21-year-old German is aggressive without the ball and composed with it, combining traditional defensive skills with an expert ability to pick a pass from the back.

Mahrez was desperate to seal a move away from the King Power Stadium last summer, but Leicester stood firm and retained the wide man when their valuation wasn’t met by would-be suitors. They won’t be able to keep hold of him forever, though, and Chelsea would be wise to test the water as they seek another inside-forward option for their 3-4-2-1 formation.

A tricky dribbler who’s lethal when he works the ball onto his left foot within shooting range, Mahrez has already shown he can do the business in the Premier League. This makes him a relatively low-risk target.

Bayern are reportedly closing in on a deal to sign Leon Goretzka on a free in the summer, which could push Vidal closer to the Allianz Arena exit door. A January departure is unlikely given the Bavarians are targeting Champions League glory in the coming months, but a hefty offer from Chelsea would no doubt prove tempting.

Vidal thrived under Conte at Juventus and has the attributes to succeed in the Premier League, offering a wonderful combination of drive, energy and technique in the centre of the park. The all-action Chilean midfielder isn’t nicknamed ‘The Warrior’ for nothing.

Chelsea were heavily linked with a move for Luke Shaw when he departed Southampton in 2014, but then Blues boss Jose Mourinho (whatever happened to him?) criticised the left-back’s “excessive” wage demands.

“We would have killed our stability with Financial Fair Play and killed the stability in our dressing room,” the Portuguese said when asked to explain why the west Londoners didn’t pay the defender what he wanted.

With his contract up in the summer, Shaw could move on again this month. Although he hasn’t kicked on as expected in the last three-and-a-half seasons, the gifted 22-year-old still has bags of potential.

Unlikely perhaps, and certainly a more ambitious target than Mahrez, but Sanchez’s contract situation means nothing is off the table. The Arsenal forward has less than six months to run on his deal at the Emirates Stadium and appears to have no intention of signing a new one, which leaves the Gunners in an awkward predicament: they can either sell now for a fee, or lose him for nothing in the summer.

Manchester City and Manchester United are the two clubs most strongly linked, but – if Arsenal are willing to sell to a Premier League rival – Chelsea could also look to tempt the Chilean with a late bid. Sanchez’s form has dipped at times this term, but he remains one of Europe’s deadliest attackers on his day.

10 of the best January transfers you've probably forgotten about

Ranked! The 12 most disappointing transfers of the season

Gimenez was rated among the world’s best young centre-backs a couple of years ago, but his development has stalled since 2015/16, the last season in which he was a regular starter.

The Uruguayan began only 12 La Liga games last term and has been named in Diego Simeone’s XI on just five occasions this time around, with Stefan Savic and Diego Godin the preferred partnership in the heart of Atleti’s defence.

There’s no doubting the 22-year-old’s talent, however, with grit, aggression and versatility – Gimenez can also play at right-back or in midfield – among his standout attributes. He also admitted last year that he “dream[s] of playing in the Premier League”, so would presumably jump at the chance to join a club like Chelsea.