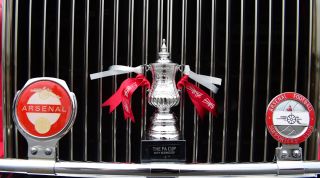 Cardiff City 1-0 Arsenal
A quizmaster’s dream final: Not just the only time the cup has left England (well, apart from the times it was presented at the Millennium Stadium), but also saw the first live radio broadcast of a football final. Arsenal were huge favourites but Bluebirds hero Hughie Ferguson netted the only goal of the game in the 74th minute following a terrible error by Gunners keeper Dan Lewis. Ferguson struck a weak shot at Lewis, who dived to make what looked like a comfortable save. However, the keeper fumbled the ball as he gathered it, and the ball squirmed between his body and his elbow. In desperation Lewis turned and tried to reclaim the ball – but only succeeded in knocking it into the net. On St George’s Day, the Welshmen had beaten the English side – thanks in part to a keeper born in the Rhondda valley above Cardiff. Lewis later claimed it was because it was his goalkeeper’s jersey was greasy – which prompted decades of Highbury kitmen to wash brand-new goalies’ tops before they were worn in matches. Lewis badly injured his knee in 1930, retiring from the game in 1931 – the same year the tragic Ferguson gassed himself after falling into a depression.

Newcastle 2-1 Arsenal
Controversy at Wembley over whether the ball crossed the line didn’t begin in 1966: three decades previously, Arsenal had been on the rough end of a questionable decision that ended up costing them the cup. Herbert Chapman’s side were 1-0 up through the brilliantly-named Bob John when Newcastle winger Jimmy Richardson chased a long ball and crossed it from what photographs and footage later revealed was clearly behind the line. Richardson’s cross was turned home by Jack Allen, who later scored the winner. Arsenal consoled themselves by winning the next three league titles.

Arsenal 2-1 Liverpool (AET)
Charlie George is still revered in N5. The Islington-born local lad came good in the game that clinched the Double, five days after Arsenal had won the league at White Hart Lane. His iconic celebration in that yellow shirt after thumping a terrific shot past the startled Ray Clemence will always be remembered by Gooners everywhere – as will his unkempt long hair, and the flares worn by the red half of north London at Wembley that day. Who said the 70s were a decade fashion forgot?

Ipswich Town 1-0 Arsenal
This unexpected defeat to Bobby Robson’s vibrant Ipswich Town side prompted the teaser: “What is taken to the FA Cup final but never used?” The correct answer, of course, is the loser’s ribbons which are not tied to the trophy – but wags replied “Malcolm Macdonald”.

Arsenal’s motormouthed Geordie had talked up the fact he was going to score beforehand, only to have a poor game. Town hit the bar three times – twice from John Wark – before Roger Osborne hit the only goal of the game in the 77th minute.

He promptly fainted with emotion, or perhaps shock – but either way the unsung team from sleepy Suffolk walked away with the FA Cup for the only time in their history, as the north Londoners again lost a final to massive underdogs to the delight of the nation.

Arsenal 3-2 Manchester United
The yellow shirt is deemed to be a lucky one by hordes of Gooners who remember this game as the five-minute final. First-half goals from Brian Talbot and Frank Stapleton had Arsenal coasting at 2-0 against Dave Sexton’s United; however, with four minutes to go Gordon McQueen (Hayley’s dad) netted – and two minutes later Sammy McIlroy equalised. The yellows looked dead on their feet and might have succumbed to a resurgent United in extra-time had not the legendary Liam ‘Chippy’ Brady intervened. The much-loved Irishman took the ball down the left flank before nudging it to Graham Rix, who sent a long first-time cross over Gary Bailey for Alan Sunderland to slide in at the far post.

Arsenal 0-1 West Ham United
The yellow shirts weren’t so lucky in 1980. It seemed the whole of the East End and most of Essex was at Wembley as the Irons became the last side to date to claim the cup for the Second Division (ask your dad). And for the fourth FA Cup final in eight years, underdog-lovers rejoiced as the ‘smaller’ side won 1-0 – West Ham following Ipswich in 1978, Southampton (1976) and Sunderland (1973).

The match was settled in the 13th minute by cultured playmaker Trevor Brooking, somewhat unusually scoring with his head, but the match is just as well known for a slice of professional brutality from big Willie Young. When Paul Allen – at 17, the youngest-ever FA Cup finalist – scampered through towards Pat Jennings’ goal, the brawny Scottish centre-back had no hesitation in tripping the teenager... with just a free-kick and yellow card as jeopardy. Cue public opprobrium and moral indignation – not to mention alleged death threats from East End gangsters – although Young’s unfortunate action did pave the way for ‘professional fouls’ to be met by a sending off, with Manchester United’s Kevin Moran the first FA Cup final recipient five years later.

Arsenal 2-0 Newcastle United
A heatwave. Marc Overmars racing through the Georgie defence to make it 1-0. An equally jet-heeled Nicolas Anelka making the game safe at 2-0.  Toon fans singing their hearts out all afternoon. A visibly moved Arsene Wenger shaking Tony Adams' hand at the end in a sign of utter mutual respect. Arsenal clinching the Double. If Carlsberg did cup finals, this was one for the Gooners.

If the final was something of a walk in the park, Arsenal’s progress to it had been anything but. Three times they were held at home – by Port Vale, Palace and West Ham – but won the away replay, before squeaking past Wolves in the semi thanks to Christopher Wreh. The Liberian started the final but his career soon went downhill: squeezed out by new rivals like Thierry Henry and Davor Suker, he subsequently turned out for Al-Hilal, Bournemouth, St Mirren, Persepolis, Bishop’s Stortford, Buckingham Town and Perseman Manokwari.

Arsenal 1-2 Liverpool
The first FA Cup final of the new millennium (according to pedants) broke new ground. It was the first outside England, held at the aptly but increasingly datedly named Millennium Stadium. It was also the first contested by two managers from outside the British Isles, with Arsene Wenger facing Gerard Houllier.

But the French Connection was more like the Great Train Robbery as Liverpool sat back, soaked up pressure and somehow came from behind to snatch the cup. Arsenal dominated and were denied a clear penalty when Stéphane Henchoz blatantly handled the ball on the line after Thierry Henry skipped past Reds keeper Sander Westerveld. Referee Steve Dunn – still cursed by Gooners – failed to spot the offence, although his glaring gaffe didn’t appear to matter after Freddie Ljungberg scored in the 72nd minute.

However, Houllier hurled men forward, bringing on three forward-thinking subs in Gary McAllister, Robbie Fowler and Patrik Berger – while Wenger withdrew Sylvain Wiltord for Ray Parlour. In the 83rd minute Michael Owen slashed in the equaliser, and five minutes later he outpaced the defence to bag the winner.

Liverpool went on to complete a Treble of sorts with the UEFA Cup four days later, while that autumn Owen would bag a hat-trick in England’s 5-1 win in Germany. In Munich, England scored with five of their six shots on target; in Cardiff, Liverpool had scored with two of their four. Perhaps possession isn’t everything...

Arsenal 0-0 Manchester United (Arsenal win 5-4 on penalties)
“Boring, boring Arsenal” never did Don Howe or George Graham any harm, and this may have been the most defence-minded display of Arsene Wenger’s career. Manchester United had beaten Arsenal home and away in the league, and in the sides’ previous nine meetings the Gunners had only won once (a Community Shield). Clearly, something had to change.

Even though United had problems in defence – full-backs Gabriel Heinze and Gary Neville were both injured – Wenger chose a 4-5-1, with Dennis Bergkamp the not particularly advanced 1. Shortly after the hour, even he was replaced by winger Freddie Ljungberg, and when Jose Antonio Reyes was sent off Arsenal pretty much parked up and played for penalties.

Over the two hours, Arsenal had one shot on target – in the 97th minute – but all five of their shootout penalties hit the mark, with Jens Lehmann’s save from Paul Scholes meaning Patrick Vieira’s last kick in an Arsenal shirt won the cup. With this level of pragmatism added to their undoubted artistry, surely the Gunners would be entering a new era of trophy-strewn success?

Arsenal 3-2 Hull City (AET)
Pre-match expectations that the Gunners would easily end their trophy drought were blown away when Hull went 2-0 up in eight minutes through centre-backs James Chester and Curtis Davies – the latter having been turned down for a boyhood Arsenal trial. It could have been three moments later had Kieran Gibbs not cleared off the line from the Tigers’ third centre-back Alex Bruce.

The Gunners quickly regrouped and halved the deficit with a 25-yard Santi Cazorla free-kick. Nearly an hour later, Laurent Koscielny bundled home an equaliser, but Hull remained tricky to get through. In extra-time Wenger shuffled his creatives, replacing Cazorla and Mesut Ozil with Tomas Rosicky and Jack Wilshere – and three minutes later Giroud’s backheel allowed Aaron Ramsey to end the nine-year wait for silverware.

Layth Yousifis the author of Arsene Wenger: 50 Defining Fixtures. His next book is out this summer.