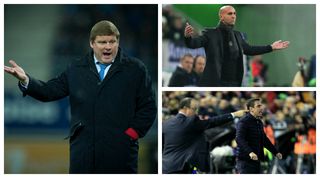 Gent became the first Belgian club to qualify from the Champions League group stage. Manager Hein Vanhaezebrouck spoke to his players in the lead-up to the last-16 draw. “OK, you all want to play against Messi, I can understand, but remember one thing: when in 30 years you tell your grandchildren ‘I played against Messi of Barcelona’, the next question they’re going to ask is: ‘What was the result?’ And you will have to say: ‘We lost 5-0 and 6-0!’”

Gent were drawn against Wolfsburg.

Senol Gunes led Turkey to third place at the 2002 World Cup, securing his legendary status despite no domestic league title to his name after 28 years in management. Finishing runner-up with Trabzonspor in the Turkish championship four times was considered nonetheless outstanding for a club battling against the country's traditional powerhouses.

In June Gunes was handed the reins at Besiktas following Slaven Bilic's exit, with the task of adding to just two league titles in 20 years. A run of 12 victories in their last 15 games has ensured Besiktas are top at the midway stage of the season. He faces the fiercest challenge in Vitor Pereira, the Portuguese coach currently in charge of Fenerbahce, who lie just one point behind. Pereira has experience of winning championship titles: he led Porto to successive league championships in 2012 and 2013 followed by a Greek title with Olympiakos earlier this year.

If Pereira does finish the season as champion of the Turkish Super Lig, he will become the first Portuguese manager to do so. The last eight titles have all been won by Turkish managers, so the expectations on Gunes are substantial, especially as the entire population endears itself deeply to the man who led their country to a World Cup semi-final. Perhaps even Fenerbahce supporters would forgive Gunes were he to pick up the one trophy he craves the most.

Andre Schubert took over a Borussia Monchengladbach side rock bottom for morale and the Bundesliga table after losing their first five matches of the season. Schubert’s history as a boss was so unremarkable that his new title as ‘interim manager’ was expected to be short-lived. But a run of six straight victories averaging 3.5 goals per game lifted Gladbach to 5th in the table, earned Schubert a permanent contract and prompted the German public to take full notice.

Even more spectacularly, Schubert’s men smashed Bayern Munich’s domestic dominance with a 3-1 victory, Pep Guardiola’s only defeat in the Bundesliga this season.

Schubert’s sensational run of results recently came to an abrupt end with three defeats on the trot: a 5-0 drubbing at Bayer Leverkusen, a 4-2 Champions League defeat at Manchester City and a 4-3 defeat at home to Werder Bremen in the German Cup. But doubters were somewhat silenced in the final game of 2015 as Schubert’s men pulled off a dramatic 3-2 victory over Darmstadt. Trailing 1-0 and down to 10 men after Granit Xhaka was sent off during the first half, Schubert’s men rallied to lift themselves to 4th in the Bundesliga.

But in the post-match press conference, Schubert asked the journalists if they remembered who was 4th at the end of 2014. He was greeted with silence before stating: “Exactly. It doesn’t matter where you are now, the only thing that matters is where you finish the season.”

Not a name you may have heard of, nor one that trips off the tongue with ease, but Gent's Vanhaezebrouck is the man behind the most extraordinary story of this season’s Champions League. His side are the first Belgian club ever to negotiate the group stage successfully. A draw and two losses in Gent’s first experience of the big time was followed by three straight victories over Valencia, Lyon and Andre Villas-Boas’s impressive Zenit.

Earlier this year Gent’s Ghelamco Arena stadium marked scenes of inaugural triumph as Vanhaezebrouck led his players to a first Belgian title. And they did so with a style and panache that defined their Champions League successes; never wavering in their passing and movement even when a goal behind. If late-goal thrillers are also the lifeblood of football and the craving of supporters, Kalifa Coulibaly’s crucial 95th-minute winner in Lyon will be freeze-framed within the club’s corridors as the moment of peak drama in an otherwise unremarkable history.

Those scenes of wild euphoria were repeated in a very different context when Gent drew German club Wolfsburg – who had also never progressed beyond the group stage – in the last 16. While Arsenal-Barcelona, Juventus-Bayern and PSG-Chelsea may stir the senses, we’ve seen these games before. Gent vs Wolfsburg will involve two sets of players facing an altogether new experience. Vanhaezebrouck’s players in particular may never get this opportunity again.

G-Nev’s unveiling as Valencia manager on December 2 surprised all of us. At his opening press conference he was nervous but focused, accompanied with characteristic intensity and a sense of humour at appropriate moments. We were all intrigued, if not convinced. Neville was conscious of this. “I would question my appointment, as a neutral observer. I would be sceptical.”

The problem is Valencia’s fans are not neutral observers, they are notoriously scathing when results don’t go their way. And their impatience is already wearing thin just one month into Neville’s appointment.

His tenure began positively as Valencia held Barcelona to a 1-1 draw at Mestalla, with Neville in the stands. Two further draws in La Liga were viewed as ‘spirited’ having snatched a point from the jaws of defeat on each occasion. Even a 2-0 Champions League defeat at home to an out-of-form Lyon was considered insignificant because a victory would not have altered their final group position of third.

New Year’s Eve 2015 will linger in Neville’s memory, though, particularly Bruno Soriano’s stunning free-kick which earned Villareal their 1-0 win against Valencia. Neville’s first defeat as manager. Still without a win. “We have to focus on the next match,” he urged in his post-match press conference. That was Real Madrid at Mestalla on Sunday evening, and another spirited draw for the highest-profile British manager in La Liga since the days Sir Bobby, John Toshack and El Tel.

Battles to watch in January