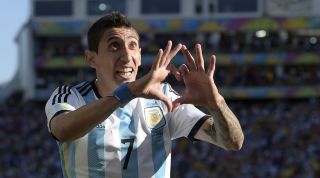 Fideo, they call him in Argentina. Due to being tall and thin, Angel di Maria has inherited a nickname that translates as 'noodle'. Team-mate Fernando Gago came up with the moniker, and soon Lionel Messi, Kun Aguero & Co. were all using it. Except, of course, when team director Carlos Bilardo was within hearing distance.

“No, no! Bull, he’s a bull, you need to call him Bull,” Bilardo would yell. He was convinced that 'Noodle', a flaccid and skinny foodstuff, wasn’t the right label for someone with so much strength, stamina and energy.

Di Maria laughs when asked about it. He's happy as long as nobody calls him cascote (rubble). “It was something my dad used to say to me when I didn’t understand something, or when I was too stubborn. As hard as a rock,” he says.

Ironically, Fideo used to play for a club, El Torito (The Little Bull) that sold him to Rosario Central for a record fee of 25... footballs. “Yes, that’s right, my first transfer was for 25 balls. And I couldn’t believe my luck. I was a Rosario Central fan and with that transfer, I’d be closer to my idol, Kily Gonzalez. Some people compared me to him, but to me he was on a pedestal. We ended up playing a season together.”

The Di Marias worked in a charcoal factory of their own. And no matter how skinny the little Angel was, he regularly had to load bags of five, 10 and 20 kilos of charcoal. The neighbourhood depended on them to prepare good asados, the typical Argentinian barbecue.

The hyperkinetic Angel, who had been advised to play football and other sporting activities in order to burn off some of the excess energy he had coursing through his young body, was always willing to help. “My neighbourhood was everything to me. When I was 18, I tattooed it on my left arm,” he says. ‘Being born in La Perdriel was and will be the best [thing] that ever happened to me,’ it reads.

As a sign of friendship, long before his debut in top-flight football, he and his six friends from the street also had a star and a Chinese letter tattoed upon their person. “Mine is on the back of my left leg,” he explains. Those six were the same friends that travelled to the World Cup final in Brazil in a plane Di Maria rented for them. When he earned his first big money, he forced his parents, Miguel and Diana, to quit the charcoal factory. “It was very hard to be there, especially in winter, freezing under a roof that was just metal,” he recalls.

Di Maria started out on the left wing, but his positions changed so much during the years that nowadays not even he can describe his 'strongest' role.

“I consider myself an attacking player, almost a forward, but I’ve played in different positions and I always felt comfortable," he says. "For Argentina, I was almost a fourth forward, starting behind Messi, Aguero and Higuain. And when Messi played as No.10, I was wide open on the left. But at Real Madrid, Mourinho played me on the right because Cristiano was on the left, and I also liked it because it allows me to cut inside and take shots with my left foot.”

Before becoming the hero of the Champions League final and Argentina’s most expensive footballer, he was also deployed as a holding midfielder, and even at left-back. In every case, speed has been a natural part of his game. “I run, and run, and run. And when I can’t run anymore, I get substituted,” he told El Gráfico in an interview last season.

Di Maria is not only a player – in Argentina, he’s also a style. Players try to be like him, and the term 'Di Maria style' has become very popular. “I don’t see players with my characteristics in Europe, simply because I don’t think there are two players alike. They compared me to Kily Gonzalez because of our attitude and because we were left-footed, but I always believed we were different.”

Di Maria's rise in the Argentina shirt has also been spectacular. The Albiceleste No.7 made his international debut in 2007, in the Under-20 team that played the qualifiers and then the World Cup. Alongside Aguero and Ever Banega, he became one of the team’s best players and scored against Panama, Poland and Chile before being ruled out of the final through injury.

In 2008, Angel was the hero of the gold medal-winning Olympic team, scoring a stunning winning goal over the keeper’s head in the final against Nigeria. That same year he made his senior debut against Paraguay, playing alongside Juan Roman Riquelme, Lionel Messi and Carlos Tevez.

He has since been considered an untouchable member of the team by Diego Maradona, Sergio Batista and Alejandro Sabella. Six years later, he has already played at two World Cups and is one of Argentina’s most popular and recognisable stars.

“Everything changed when I signed for Real Madrid and started being called more often to the national team. Until then, perhaps I was able to walk in Buenos Aires and not be recognised on the streets,” he says.

His voice is still not famous. He doesn’t much enjoy talking to the press, although he’s not exactly shy when he’s in front of a microphone. During the World Cup, days before his man-of-the-match performance and thrilling, 119th-minute goal against Switzerland, he told a journalist: “Who says that we didn’t play well? Only you can think something like that. This is a World Cup, not a walk on the park. It’s not easy for anyone.”

Sir Alex Ferguson almost signed Di Maria from Benfica in 2010, but Real Madrid were quicker and snatched him from under the Scotsman's nose. He’s the kind of footballer Fergie adored: low profile, big heart (and not just the one he makes during his goal celebrations, dedicated to his wife Jorgelina), talented and with a will to sacrifice personal glory for the good of the team. He's perfect for the Premier League.

Now, after another World Cup, Di Maria’s arrival in England with Manchester United can make him an even better player. His dribbling is almost invisible. He doesn’t need to have the ball glued to his boot to advance, as he underlines: “I like to send it forward and run, a vertical kind of game is the one I enjoy most, and also when I run looking for a deep ball that might arrive when I’m at my top speed.”

Unlike the baroque style of some of his compatriots, Di Maria enjoys minimalism rather than ineffective dribbling. One touch could be enough, like the one against Switzerland, when he captured Messi’s assist with a shot that sent Argentina to the quarter-finals.

But can the Premier League make him be even quicker? “I couldn’t beat Usain Bolt in a flat race, if that’s what you’re asking,” he laughed last year, when asked about his 100m marks. “But then, again, I would like to see how fast he is carrying a ball with his feet.”