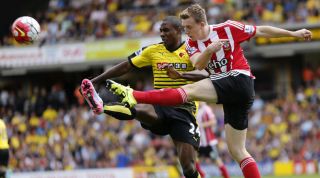 On paper this match should be a simple victory for Manchester United, who have lost just once at Old Trafford this season and welcome a Southampton team that have not won on the road since November 7. However, United’s recent transition into a more direct attacking team has left them more open at the other end, and thus in-form youngster Matt Targett could cause Matteo Darmian some serious problems on United’s right.

United have clearly shown greater urgency to pass the ball forward, attempt through balls and attack directly since the 0-0 draw with Chelsea in late December. Across the three Premier League games since that day they have averaged 49.4% possession (down from 56.5% over the season), attempted 72.9 long balls per match (up from 70.4 over the season), and attempted 26.0 dribbles per game (up from 18.3 over the season).

Unsurprisingly, this has caused greater instability in defence. Marouane Fellaini’s continued inclusion in central midfield is certainly part of the problem (his positional indiscipline is creating huge gaps in the middle), but also Jesse Lingard, Memphis Depay and Anthony Martial regularly fail to track back when possession is lost (they are the second-most dispossessed team in the league – 14.8 times per match). If Fellaini and Bastian Schweinsteiger were more mobile, and thus more adept at covering these gaps, they would look far more secure.

Southampton will be encouraged by the spaces United leave. They attempt more crosses (26 per match) than any other team, have scored the second-most headed goals (eight) and win the second most aerial duels (19.3 per match). This could be an exciting end-to-end encounter.

The key battle could be between Targett and Darmian. Targett has impressed in Southampton’s last two matches, playing first as a left wing-back and then as a left winger, making some superb runs inside the opposition right-back; he assisted a goal against Watford from this zone and then earned a penalty against West Brom.

With Ashley Young injured for some time, Italy international Darmian is likely to start in his place. He's played the last four games at left-back but should return to his natural position this time around, unless Van Gaal elects to keep him there. It could be a big opportunity for young Cameron Borthwick-Jackson to stake his long-term claim for a place.