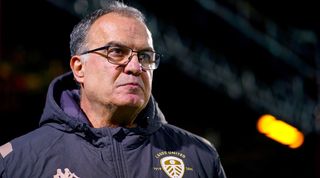 Liverpool’s 22 point advantage over Manchester City is a buzzkill for Premier League fans. Trawl to the same depth below West Brom and you’d drag up almost two-thirds of the second division, all the way down to Birmingham in 15th. Thirty-five points cover top to bottom in the Championship, but only Liverpool to 6th-placed Wolves in the top-flight.

Slaven Bilic’s West Brom are currently just a single point ahead of 2nd-placed Leeds United. A Leeds United who have already emerged from their annual mid-season meltdown, we might add. Marcelo Bielsa’s side are on a run of four straight wins - following just two in their previous 11 - and are now just close favourites to win the league. Absolutely nobody will be surprised if they implode, however, having made a habit of doing so in recent years.

Fulham, five points behind Leeds, visit Elland Road later this month in what is potentially a season-defining game for both sides. The Cottagers have the most prolific striker in the division, Aleksandar Mitrovic, while Leeds comfortably boast the best defence. It promises to be a fascinating showdown, contested by coaches - Bielsa and Scott Parker - at vastly different stages in their careers.

The battle to fill the play-off spots is as intense as ever. Parker's side are separated from eighth-placed Blackburn by just 10 points. Between them, Nottingham Forest, Brentford, Preston and Bristol City all share legitimate ambitions of playing Premier League football this August. Those six teams include two-time European champions and Premier League winners, as well as a team who’ve not played top-flight football since 1947. Brentford, in case you were wondering.

The Bees have been in stellar form this season, not only keeping pace with traditionally bigger clubs, but playing arguably the best football in the division. They have a daunting run of fixtures coming up, however, including a trip to Craven Cottage and a home clash with league leaders West Brom in their next three games. March could be a make or break month for them.

Fulham have the hardest run-in of the promotion chasers. Half of their remaining 10 games come against a direct rival, starting with Bristol City, Brentford and Leeds in their next three games. Seventh-placed Bristol City face a rival in four of their final 10 fixtures, and are therefore favourites to miss out. Blackburn also have a huge task on their hands with three of their final 10 against one of the seven teams above them in the table.

Nottingham Forest and Preston, 4th and 6th in the table respectively, each have manageable run-ins but could deal a lethal blow to other when they face on April 13, while Leeds have the easiest remaining fixtures of all.

One of the things that makes the Championship so enjoyable, and frustrating for fans of those involved, each year is the relative equality across the league, and this season is no different. Liverpool losing 3-0 to Watford was a result which shocked the Premier League. Fulham's 3-0 loss at home to bottom-placed Championship side Barnsley two weeks earlier barely raised eyebrows.

It’s what makes gaining promotion such a tall order. It’s also what makes the Championship the most exciting league to watch, with any of those top eight capable of slipping up. There are still 30 points still up for grabs, after all.

Liverpool are home and dry with 10 games to go, nobody can catch them. In the Championship, though, you wouldn't bet against the drama running on until the final kick of the season.