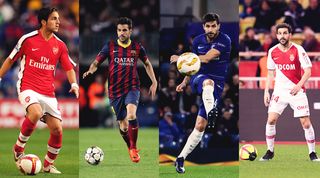 Remember to tweet your scores @FourFourTwo and share with your mates - particularly if they're Arsenal or Chelsea fans.

Cesc Fabregas was 15 when he burst onto the scene for Arsenal, a slight midfielder with no. 57 on his back, known as Francesc to commentators.

His first match came in the League Cup against Rotherham in 2003. That was a night that the minnows took Arsenal to a penalty shootout in which both keepers took spot-kicks.

Since then, Cesc has gone onto great glories. He assisted Andres Iniesta's winning goal for Spain in the World Cup final, played under Pep Guardiola at Barcelona and then won that elusive Premier League title with Chelsea.

Since the midfielder is 33 today, we'd like you to name every single club he's ever scored against.