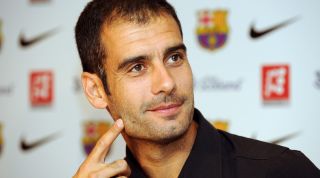 For all the special football Manchester City have under him, when most people think of Pep’s most breathtaking managerial achievement (so far), they will cast their minds back a decade.

In May 2008, Guardiola was named as Barcelona boss for the 2008/09 season – and that went reasonably well, as his side won the Treble. However, it wasn’t just the trophies that Barça racked up during his astonishing four-year spell.

It was the style of play; revolutionary high-speed, high-pressure tiki-taka with a ruthless cutting edge. It was as if Barcelona were playing a whole new game, and only Guardiola and his players had the rulebook.

Yet who were the players that made this side legendary? These are the 49 footballers who made at least one La Liga appearance during Guardiola’s four-year stint as Barça boss (from 2008 to 2012).

There are 12 minutes on the clock to name as many as you can, based on their Liga appearances under Pep and playing position. Let us know your score @FourFourTwo – we’ll retweet the best, if you don’t give answers away – and please challenge some friends while you’re at it.