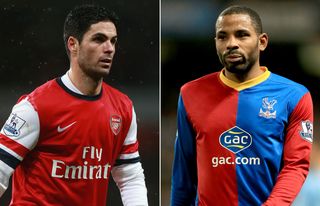 Misfiring Gunners versus high-flying Eagles (no points for detecting the puns).

We’ve reached that time of year where Arsenal’s injury ravaged, worn-out squad implode and their hopes of silverware disintegrate.

Well, that’s what the naysayers would have you believe (and most Arsenal fans). There’s no smoke without fire. Historically the Gunners, post-Invincibles (2004), have developed a habit for choking when the big games come thick and fast and their delicate players crumble under the pressure.

However, this season Arsenal have shown a new resilience and determination – much to the surprise of their doubters – which has seen them go toe-to-toe with big spending Manchester City and Chelsea.

Until this week that is. The Gunners conceded top spot in the Premier League after drawing 2-2 with Southampton at St Mary’s on Tuesday. The following night City demolished Tottenham 5-1, pushing Arsenal down to second. There was some mercy as Chelsea drew at home to West Ham. The critics were quick to round on the Gunners, but in reality Southampton, although a little inconsistent, are a talented side capable of thrilling, attacking play.

Sunday’s game against Crystal Palace precedes a run of crunch games for Arsene Wenger’s side. They face Liverpool away in the Premier League, followed by Manchester United’s visit to north London and Liverpool again in the FA Cup, before welcoming European champions Bayern Munich to the Emirates in the Champions League.

Taking the Palace game lightly could prove a fatal mistake. The Eagles have won two on the bounce, defeating relegation rivals Stoke and Hull, both by a single Jason Puncheon goal.

Palace are now 14th in the table and five points clear of the relegation zone. Their resurgence under Tony Pulis has been remarkable.

Unsurprisingly, the pragmatic manager has made the south Londoners hard to beat, instilling discipline and organisation into their ranks.

This has served them well against the top sides. In December the Eagles were unlucky to lose 2-1 at Stamford Bridge, with their performance drawing praise from Jose Mourinho. Palace then frustrated free-scoring Man City at the Etihad Stadiun, before being undone by an Edin Dzeko goal. Pulis is fighting to keep his team in the division and maintain his record of never being relegated. This is no formality for Arsenal.

Wenger's options in midfield depleted after Mathieu Flamini incurred a four-match ban for a straight red card. To make matters worse, Aaron Ramsey has suffered a setback in his recovery from injury. Jack Wilshere is struggling after aggravating his troublesome right ankle during the Arsenal’s 4-0 win against Coventry in the FA Cup. Tomas Rosicky is a doubt as his broken nose continues to heal.

Palace defender Jonathan Parr is hoping to be back after he suffered a concussion against Wigan Athletic in the FA Cup. Kagisho Dikgacoi and Jerome Thomas are still sidelined.

Arsenal can’t afford to let the seed of doubt to bloom after dropping points against Southampton. Injuries and suspensions to key players will only feed this energy-sapping uncertainty. They need experienced heads to guide them through this tough run of games.

The 31-year-old vice captain has the nous and the calming influence, both on the and off the pitch, to steer Arsenal in the right direction. When Arsenal were 1-0 down to West Ham at Upton Park on Boxing Day, Arteta kept the ball and his head. He made 16 more successful exchanges than the next-best passer on the day, completing 83 of his 87 attempts. His ball recovery rate was peerless – seizing upon the runaway sphere 13 times. Arteta completed a hat-trick of chart topping performances by making 4 ball-winning challenges.

Palace will come to north London to defend. The longer they can hold out, the more pressure and tension will mount on Arsenal. Arteta could play a crucial role in maintaining the team’s composure.

Wenger’s reaction to the draw at Southampton could be seen as one of denial or one of reason. He reflected that the result was a “fair point”, but that Flamini’s sending off was a “bit harsh”. Either way, he will be frustrated at not keeping up the pressure on Man City and Chelsea. There’s no need to crack open the diazepam just yet. The Gunners are unbeaten in seven Premier League games, winning five and drawing two. They welcome Palace to the Emirates having claimed 26 points from a possible 33 at home.

Pulis is more likely to skip the pacifying drug and whack a shot of adrenaline straight in his heart. He’ll work his dogs of war up into a mouth-foaming frenzy, because he knows better than anyone that Arsenal 'don’t like it up ‘em’. Can they implement this siege mentality away from Selhurst Park? Their away record under Pulis suggests not. They’ve lost four and won one, but three of those losses have come against Chelsea, City and Spurs.

Casting aside league position and talent, this will be a tough game for Arsenal. Palace will defend defiantly and in numbers against the Gunners’ pass-and-move assault. Eventually, the defensive lines will crack and Arsenal will score twice without reply. 2-0.