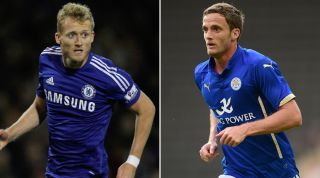 Champions elect against the Championship champions.

You have to admire the chutzpah of Mr Scudamore, claiming our Premier League is the most open competition in the world. One game in and it already looks to be a two-horse race, with Jose Mourinho’s rebuilt Chelsea most likely to push Manchester City for the title.

A single game against the least likely members of the league is nothing much to base a campaign on, but the omens look ominous already after the routine win at Burnley. Chelsea’s pace and power, strength in depth and clever one-touch through-balls took them past the plucky newcomers, as we have to call them, without breaking sweat.

The arrival of Cesc Fábregas and Diego Costa (and recall of Thibaut Courtois) have improved an already formidable squad.

With Fabregas prompting in the middle of midfield, Oscar, Eden Hazard and André Schürrle probing further forward and the Spanish-Brazilian Costa bludgeoning back fours into submission, this season's Chelsea look like last season's Chelsea but on steroids.

We probably won’t learn much more about them against Leicester this weekend, particularly not at home where few smaller teams will feel confident enough to go in search of a win, but Chelsea's relatively gentle opening to the season will allow Mourinho to fine-tune his first team. "What is my first-choice today might not be my first-choice tomorrow,” he said before the Burnley game, confirming he still doesn't quite know.

Meanwhile their visitors made a promising return to the Premier league after a decade away, coming from behind twice to hold Everton on the opening day. A team that went 26 games with only a single defeat last season, winning 31 league matches and breaking the 100-point barrier will clearly have a strong spirit, but Leicester’s opening to the season has been sent to test their resolve.

Everton (H), Chelsea (A), Arsenal (H), Stoke (A) and Manchester United (H) suggests someone up there doesn’t like them, but if City can take points from any of those games, they’ll hope to be within touching distance of the mid-table mob when they arrive at Crystal Palace on September 27.

The fast, free-flowing, passing game that swept them to the Championship title last season should pick them up plenty of points along the way this term, but not against a faster, more free-flowing, better passing team on Saturday. This is likely to be one of the games they'll need to suck up and chalk down to experience.

Chelsea have no injury worries and a full and impressive squad to choose from. Leicester do and so don't. Matthew Upson is out until November, while midfielders Matty James and Danny Drinkwater will both miss out. However, fit-again Marc Albrighton and Jamie Vardy could both be in line to chase shadows.

Leicester's record signing took the jump up to the Premier League in his stride, causing bother in the Everton defence all afternoon and opening his account after 22 minutes. "I think he showed a lot of qualities. His strength and his work-rate will probably have surprised a few people," chirped Nigel Pearson after the game. He survived on scraps against Everton but still impressed and while his influence may not be pivotal to the outcome of this game, it will be interesting to see how he fares against wily old cats JT and Gary Cahill.

Despite being saddled with Fernando Torres and Demba Ba on arrival last summer, Mr Mourinho proclaimed himself The Happy One. Now, having lightened Roman’s saver account by £82m on Filipe Luis, Fabregas and Costa, he should be heel clicking all the way down the King's Road. Yet the man who has to win the title this season seems to have softened his stance on second place representing failure. “We have to fight for the title and after that if somebody is really better than us, it’s because they were fantastic,” he backtracked.

Fresh from signing a new three-year deal, the extremely likeable Pearson acknowledged a welcome point and return to the Premier League but offered a note of caution. “It’s encouraging, but we’re under no illusions as to how difficult this division can be. My job as a manager is to keep preaching what we’re about and hopefully we will build on what has been a good performance.”

He spent the rest of the week attempting to strengthen his squad and find cover for the influential but ageing and currently injured Upson. Esteban Cambiasso and the improbably named Rod Fanni have been touted.

Tails are clearly up, we fear a gleeful spanking. Chelsea 6-0 Leicester.