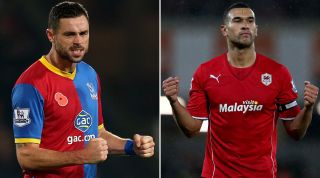 Selhurst Park gears up for Groundhog Day in battle of the low scorers.

When all seemed lost a month ago, the kindly old fixture computer gave Crystal Palace a glimmer of light. Cardiff’s visit is the last of four consecutive slugfests against sides widely considered to be the Eagles’ relegation rivals and, while there’ll surely be a medal on offer for anyone who sees this 360-minute endurance test through from start to finish, Tony Pulis’ side are now just a result away from intimate contact with the rest of the pack.

Never shy to get his hands mucky, Pulis has been pitched straight into a series of battles tailor-made for him. Unlucky at Norwich a week ago, his charges rolled up their sleeves once more to edge home against an ailing Hammers outfit on Tuesday night – and a dose of the same medicine can be expected for Malky Mackay’s visitors.

If Pulis is widely considered to be on something of a free pass at a club that still appears ill-equipped for this Premier League season, Mackay and Cardiff’s situation is more precipitous. They’ve only won once in their last eight – a fact perhaps softened by that victory coming against Swansea – and haven’t scored in their last three away outings.

Being publicly undermined by owner Vincent Tan is one thing, but Mackay might be eroding his own support base if repeats of Wednesday night’s goalless dirge at Stoke prove the norm.

Pragmatically, every point is vital for each of these newly-promoted sides - but expectations in the South Wales boardroom are considerably higher.

Pulis seems unlikely to change much for a match that offers a strikingly similar challenge to West Ham’s visit. The game looks likely to come too soon for Adlene Guedioura, still laid low with a rib injury, and ankle-afflicted Jerome Thomas - while Yannick Bolasie serves the final match of his suspension. Glenn Murray and Jack Hunt remain long-term absentees.

Cardiff wait on left-back Andrew Taylor’s fitness, although young deputy Declan John performed admirably at Stoke and may retain his place. Otherwise, Mackay has a clean bill of health.

Well, why not again? Much ridiculed in the last couple of years, Chamakh was pinpointed last week by Pulis as a player he needed to eke the best from. He didn’t make a bad start on Tuesday night, glancing home the winner and also proving the point that, while he remains unconvincing when facing goal, he’s a pretty handy outlet with his back to it. His link-up play outside the box was generally incisive, although he won only 2 of his 12 aerial duels. Chamakh has never been all about goals, but if his early Arsenal mojo has returned for good then Palace have a big asset on their hands.

These two both know how to get results and each, for now, is immovable as the other. They’ve never crossed swords before, but seasoned technical-area trackers can prepare themselves for an intriguing clash of style. While Mackay is wont to stalk the touchline in a dapper dark-blue suit and red-blue club tie – an appeaser both to fans and Tan if ever there was one – Pulis’ baseball cap made its eagerly-awaited return to top-flight action in the last week.

Even if Mackay outsmarts him in more senses than one, you’d get fantastic odds on it being wrenched from his scalp while the game’s in progress.

The cap fits once more as Pulis drags another attritional three points out of his steeds. 1-0 Palace. Again.