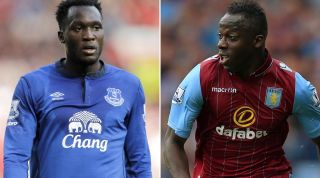 On September 22 1888, shortly before the first use of the term "Jack the Ripper", Aston Villa hosted Everton at the Wellington Road ground in Perry Barr. A fortnight later at Anfield (before Liverpool FC, Goodison Park or for that matter Villa Park existed), the teams met again. They've hardly stopped doing so since: this will be the 217th meeting of the English game's most frequent foes.

Since that debut trip to Liverpool, honours have remained remarkably even, with 79 wins each across all competitions, and five of the last seven clashes at Everton being drawn.

You wouldn't get poor odds on a spoils-share here either, but both teams need a post-internationals win to kick-start their season. Since their September victory at Anfield over that newfangled Liverpool team sent them second in the table, Villa have lost thrice to nil, conceding eight goals and slaloming down the table toward the places they were more widely expected to occupy.

They're still seven places north of Everton, though. Whether it's Europa hangovers, defensive dilemmas or second-season syndrome under Roberto Martinez, the Toffees have struggled, winning just the one league game. In fact, in their six league games over the last month, these two teams have picked up just one point, thanks to Phil Jagielka's derby-day barnbuster. But for points won at Anfield, this match would be 16th vs 17th.

It should be better than that, and an intriguing clash of styles: patient possession against blitzkreig counter-attacking. At least, that's Villa's ethos in theory, but when it doesn't create much – and they've only had 10 shots on target this season, six fewer than Diego Costa – it seems more like a limp admission of defeat: in the home defeat to Arsenal they had just 29% possession.

Paul Lambert and the newly-shaven author at his side will be hoping Everton's leakiest-in-the-league defence gives them more than a glimmer, and it might come late on if they can hold out: only QPR have a worse second-half record than Everton, who are the division's fifth-best side before the break.

That said, even if Villa lose their clean sheet they shouldn't lose heart, because their hosts have dropped the division's most points (seven) – although no Villa league game this season has featured goals from both teams. They're not usually that sort of outfit.

Everton have problems. Kevin Mirallas's hamstring ("A typical sprinting injury" – Martinez) will keep him out of the picture for "a few weeks", while we must wait to see what becomes of James McCarthy's thigh and Seamus Coleman's hamstring: "Too early to tell", says the gaffer.

Over in the junior common room, Ross Barkley is back in training but a way off playing, while John Stones's ankle surgery means he'll be unable to play out with his mates until after Christmas. That could mean turning to either Sylvain Distin, who has looked all of his 36 years and more so far this term, or Antolin Alcaraz, who seems to have smuggled himself into Goodison in Martinez's suitcase.

Up the other end – or possibly climbing above the Toffees' backline to nod home a set-piece – Ron Vlaar hopes to be back, and that will help Villa: since his arrival their 32% win-rate with him in the side has plunged to 14% without him. Sadly for the Dutchman, sidekick Philippe Senderos is sidelined with a thigh problem, while midfielder Fabian Delph is also ruled out and may require surgery on a shoulder injury.

While Everton will have more ball – mainly through Leighton Baines up the left – England centre-back Jagielka will have to organise whatever defensive troops Martinez can marshall. In (slightly unlucky) defeat at Old Trafford, nobody made more clearances (9) or won more aerial duels (3). In the last Goodison game, against a similarly counter-attacking Palace side, he completed a tidy but ultimately fruitless 103 of his 105 passes as Everton enjoyed 76.7% possession (and completed 670 passes to Palace's 151) but lost 3-2.

These two first clashed as managers seven years ago last week, when Swansea beat Wycombe in the Johnstone's Paint Trophy Southern Section Second Round in front of 5,922. The crowds have got better but Lambert's luck hasn't: he's faced the Spaniard's sides six times in the Premier League, losing thrice and winning none.

Everton will have to balance attacking intent with defensive awareness and should just about manage it. 2-1.