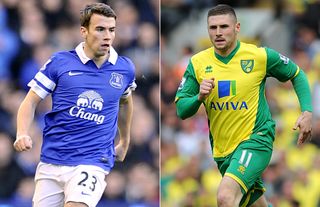 Everton aim to show Goodison they are no half-season heroes.

It was almost a year ago when David Moyes, having witnessed his Everton team pick up just six points from five games to drop out of the Champions League places, admitted his charges were overworked, and simply couldn’t compete over a full campaign. “Maybe the numbers will allow us to have a good half season, but not a good full one,” shrugged the Scot, and you only had to glance through the Toffees’ 10-year record to see he had a point: over a three-to-four-month period, Everton were regularly one of the Premier League’s form clubs, but only once could they last the pace to finish in the top four, in 2004/05.

The Goodison faithful know this better than anyone, which is why they aren’t getting carried away with talk of a Champions League finish this time around, despite all the self-belief and tidy football brought to the club by new manager Roberto Martinez, which has so far produced 38 points from 20 games.

The shock defeat to lowly Sunderland on Boxing Day – their first loss at home all year – would have stung, but Everton followed it up by beating Southampton at Goodison before pinching a point at Stoke, which will restore confidence as they enter a crucial run of fixtures: four winnable games against Norwich (H), West Brom (A), Aston Villa (H) and Palace (H), either side of away trips to arguably their two biggest rivals for a Champions League spot, Liverpool and Tottenham.

If Martinez’s men are in the top four in a month’s time, those quietly hopeful fans might finally become vocal about their team’s hopes.

There’s little in the way of optimism around Carrow Road right now, with the pressure building by the week on Norwich manager Chris Hughton as his side edge ever closer to the drop zone.

It’s been seven games in all competitions since the Canaries last recorded a win, placing Hughton at short odds to be the next gaffer out of a job (although not as short as Big Sam, obviously).

The last casualty, former Canaries defender Malky Mackay, is favourite to jump off the merry-go-round and replace Hughton should Norwich chairman Alan Bowkett run out of patience.

Still, for now the boss seems to have the support of his squad, and Norwich have certainly tightened up at the back, conceding just five in their last six league games since Luis Suarez tore them apart at Anfield. But low-scoring draws and narrow defeats don’t pay the bills, and they need to kick-start 2014 by showing more positivity in the opposition half.

Hughton won't have been helped by creator-in-chief Wes Hoolahan reportedly handing in a transfer request, with ex-Carrow Road boss turned hate figure Paul Lambert keen to take him to Villa. It’s not a done deal yet, and the bad blood that still exists between Lambert and Bowkett could make for messy negotiations.

On the plus side, the return of record signing Ricky van Wolfswinkel against Fulham will give Hughton hope. The Dutch forward has only scored once this season – against Everton in the 2-2 season opener – but looked sharp on his comeback and could take some of the goalscoring burden off Gary Hooper.

“It was really important for Ricky to get 90 minutes under his belt,” said Hughton. "We know he has missed three months, which is a fair time to be out and it is disappointing for him after a good start to the season.”

Phil Jagielka and Sylvain Distin face a further fortnight on the sidelines (both hamstring), with Antolin Alcaraz and teenager John Stones set to cover again in central defence. To the left of them, Leighton Baines is 50/50 following his recent back spasms. Further up the field, on-loan Barça forward Gerard Deulofeu’s hamstring injury will keep him out until the month’s end. Ross Barkley could miss out after picking up a toe injury.

In the yellow corner, Michael Turner and Anthony Pilkington have both recovered from hamstring problems, while Jonny Howson (back) and Alexander Tettey (ankle) are almost over their recent knocks and could feature. Away from the physio room, Leroy Fer is available having served a one-match suspension.

All hail the Irish Cafu! For all Baines’ crossing expertise from the left, the England man has been outshone so far this season by the goalscoring exploits of his fellow full-back. “Sometimes as a full-back you can get in good crossing positions, but we’ve been working to get Seamus into goalscoring positions because he has that quality,” said Martinez following Coleman’s latest net-buster, his fourth in six games to seal Everton’s FA Cup win against QPR. “I feel he can have one or two good scoring opportunities in every game.”

This was the case in Everton’s last home league game, the 2-1 over Southampton. Coleman bossed the right-hand touchline, while regularly cutting into the opposition box - the highlight of his performance being the cracking angled drive to open the scoring. Only three players on the pitch attempted more passes in the attacking third, and nobody in the game could match his 100% completion rate in this area (10/10).

There’ll be no finger-pointing and water bottle-booting from the Prem’s two calmest gaffers, that’s for sure. The unflappable pair have gone head-to-head three times in the league before this season’s opening day draw, and there’s nothing between them: Hughton’s Newcastle drawing with Martinez’s Wigan in 2010, before they exchanged victories in the Norwich vs Wigan fixtures last term. They last met on the opening day of the current campaign, Van Wolfswinkel rescuing a point for Norwich on his debut in an entertaining 2-2.