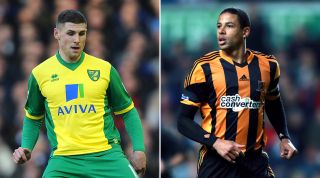 A must-win game for Chris Hughton, if not Norwich.

There can be little doubt that this season has so far gone better than Hull City could possibly have dreamed back in August.

Although they have won just two of their last 11 in the league, Steve Bruce’s side have managed to cling on to 10th place. Granted, the points gap between the Tigers and Southampton immediately above them (7) may be wider than that which stands between the them and the drop zone (5), but there appear to be enough teams in a bad enough state for the Humbersiders to feel confident for the second half of the season.

Yet their woeful record on the road – five points from 10 games - could come back to haunt them.

Bruce would probably highlight his team’s impressive home form (18 points in 11 matches from a newly-promoted team is certainly not to be sniffed at), but with no fewer than five of the league’s top eight still to visit the KC Stadium before the season’s out, picking up points away from home could suddenly become a necessity.

There are certainly worse places to start than Carrow Road, where Norwich have been beaten four times this season, with Aston Villa and Fulham among the teams to leave East Anglia with three points.

Hull will hope new addition Nikica Jelavic, who this week arrived from Everton in a deal reported to be worth £6.5 million, can make an instant impact akin to his early days with the Toffees.

The Croatian striker hit the ground running at Goodison Park, scoring 15 goals in his first 23 matches. He did then, however, lose form and subsequently his starting berth during his second season.

While Hull will just be focussing on what Jelavic can do in the short-term, there are still questions over the longer-term future of the club. Owner Assem Allam this week threatened to quit the club should he be prevented from changing its name to ‘Hull Tigers’, a threat unlikely to strike fear into the hearts of his detractors.

There’s discontent at Norwich, too, with manager Hughton once again under pressure following his (reserve) side’s limp FA Cup exit at the hands of a Fulham side so under-strength it included Darren Bent.

The Canaries are also six without a win in the Premier League. Having invested relatively heavily in the summer, it could well be that the board are starting to have the same doubts as the fans.

Saturday’s clash is the first of back-to-back home matches, the second coming against Hughton’s former club Newcastle. Fail to win either, and it’s not difficult to imagine that change could be in the Norfolk air.

Norwich centre-back Michael Turner remains sidelined with a hamstring injury picked up over the busy Christmas period, while Jonny Howson is a doubt with a back injury. Anthony Pilkington (hamstring) and Alex Tettey (ankle) are longer term absentees.

The absence of Turner is a blow to Norwich, who will instead deploy Bennett alongside Sebastien Bassong in the heart of the defence. The arrival of Jelavic gives Hull another attacking dimension, although despite his size, Jelavic isn't really a target man - he won just 1 of his 4 aerial duels when visiting Carrow Road with Everton last February. In fact, many of his goals for the Toffees were tidy first-time finishes from low crosses - displays of clever movement rather than power.

Bennett has started just seven league matches so far this season, and was certainly busy during last weekend's defeat at Everton; he made 4 blocks and 9 clearances - both more than any other player on the pitch. His distribution from the back is perhaps not the best, and Jelavic may look to exploit any space left behind should the defender move out of position and give the ball away.

Hughton and Bruce have twice previously gone toe-to-toe as managers. The first will certainly be more fondly remembered by Hughton, who saw his Newcastle side romp to a 5-1 victory over Bruce’s out-of-sorts Sunderland at St James’ Park in October 2010.

The former Ireland and Spurs full-back was infamously sacked shortly after that triumph, meaning Bruce had to wait until the second match of this season for revenge. He got it, with the Tigers winning 1-0 thanks to a first-half Robbie Brady penalty. It may not have been 5-1, but Bruce will have been content with sealing the first points of what has so far been an impressive campaign for the Humbersiders.

Norwich's winless run and Hull's frustrating away form to continue. 1-1.