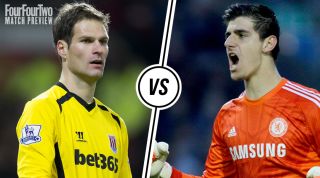 Potters plot to stop Pensioners ploughing on. Or top against 12th.

In the modern era, “we go again” is one of the more popular mantras among footballers hardwired to win. After any defeat or disappointment, the modern pro will speak of the need to get straight back on track by collecting all three points.

Winning takes care of everything, and no footballer in the world buys into this belief more than John Terry. The captain, leader, legend can’t pass a mic without beating his chest and promising that the boys are ready to “go again”. Where they’ll go, he never fully explains, but they’re always able.

And in truth, he’s right.

Having discovered that Chelsea are not invincibles after all, we all wondered how they’d react against Hull last weekend. And they reacted exactly as we all knew they would, gently squeezing the life out of cowed opponents with the help of some exceptional am-dram and some atrocious refereeing.

Chelsea’s success this season has been in stringing together winning runs, despite not always hitting any great heights. We’d have learned more about their title challenge had they not been facing a Hull on its haunches, and at home, but they were so we didn’t.

A cold Monday night in Stoke will tell us more about their ability to go again, partly because the hosts beat them in the same fixture last season (3-2), and partly because they've have fared well against the supposed ‘big’ teams this season, with wins over Manchester City, Arsenal and Tottenham.

The traditional win at home to Arsenal was followed by a draw at Crystal Palace. Indeed, all four of Stoke’s victories had been followed by defeat, so the point at Selhurst Park was ugly but it was at least progress (albeit slow progress).

Which pretty much sums up the club’s reinvention under Mark Hughes. There’s little doubt they’re moving in the right direction, and from darkness into light in footballing terms, but it’s slow and at times painful. Their better performances have come on the road, where swift counter-attacks and the inability of Joe Hart to dive on a slow-moving ball have served them well.

The fact that Monday’s game is at home would cause more concern if it weren’t for the fact they will be forced to play like the away team.

Stoke’s main concern centres on the fitness of Bojan, whose gifts as a quick-witted playmaker saw him kicked out of the game against Palace last weekend. He hobbled off nursing his hip after 54 minutes with “a bang on the fleshy part just above his hip bone”, but he should be in contention for this one.

For Chelsea, Cesc Fabregas is available after suspension kept him out of the Hull game, while the muscle injury that kept Thibaut Courtois out of that one should have cleared up. The clattering Kurt Zouma took from Petr Cech’s fist at Derby hasn’t caused any lasting damage, but Didier Drogba might not be risked after slipping awkwardly on his ankle.

Let’s assume the hosts will be chasing the ball for much of the game, which makes their need for a man capable of winning back possession all the more pressing. Stoke will press as a pack but the key man among them is either Steven N’Zonzi or the largely unsung (and recently forgotten) Cameron. He's rarely been deployed in his current central-midfield role at Stoke, with the American having become a victim of his own quiet versatility.

Pulled around the pitch to cover for injuries, his powers have diluted as a result. Against Palace he finally completed a full 90 minutes in the middle, though, and returned game-high stats of 2 blocks, 6 interceptions and 15 ball recoveries. More of the same will be required to repel the blue waves on Monday.

Despite again failing to win back-to-back games, Hughes was quick to draw a line under the 1-1 draw at Crystal Palace, probably because it was one of the worst games of football he’ll witness this season and we’d all do well to erase it from our memories. “We just cancelled each other out,” was his charitable take. He spent the week just gone contemplating the future; not in any existential way, more in terms of buying and selling players.

Some of the week was spent discussing Peter Crouch and Glenn Whelan with the chairman – both are entering the final six months of their contracts and may well be on their way, whether Hughes likes it or not. Scurrilous tabloid tittle-tattle has it that Mousa Dembele could be on his way from Spurs, though, suggesting the Welshman is already over it.

By contrast, Jose Mourinho has been too busy with proper football business to think about new signings. He spent the week steering Chelsea into the Capital One Cup semi-finals via a 3-1 win at Derby, then moved swiftly, but suavely, to dash talk of a quadruple this season.

"You spoke a few weeks about being unbeatable in the Premier League – we never did it. Now you speak about a quadruple but we must keep our feet on the ground,” he purred. “We can win on Monday. But it will be difficult. We don’t choose competitions, the next match is the most important thing.” In other words, they go again.

A tight squeeze for the champions elect. Stoke 0-1 Chelsea.