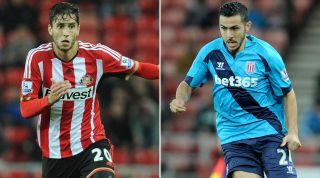 A must-win match for both sides, but for very different reasons.

These are interesting times for Stoke. Buoyed by their victory over Sunderland in the League Cup last week, they sit in 11th place with an improving reputation. Suddenly, they're not the bruising, pantomime villains of recent seasons, while the commonly held view is that they're playing some easy-on-the-eye football.

Their results are matching the aesthetics, too. Mark Hughes' men could match a club record by extending their current unbeaten run away from home to six games. Their previous undefeated charge on the road took place between February and April in 2010. Unsurprisingly they're full of swagger.

"We're really confident going into away games," said striker Peter Crouch earlier this week. "We have just won at Sunderland, we should have won at QPR and we won at Manchester City. We've got to take confidence from how we've been playing and go into the match looking for three points."

For Sunderland, the mood is less excitable. With six games played they have yet to record a league win, though only one defeat blots their copybook. Manager Gus Poyet will have also been stung by their recent League Cup defeat to Stoke given that a) they made the final last season, and b) they were ahead after quarter of an hour. That run to Wembley delivered a tonic to an otherwise miserable 2013/14 campaign. Without the same psychological buffer, winter could be frostier than usual at the Stadium Of Light.

Stoke's Peter Odemwingie is out until the new year, which carries a greater significance for this fixture. He relishes facing Sunderland, and in seven league appearances he's scored four goals against them. Mame Biram Diouf is sidelined with a hamstring injury, while Victor Moses has a tight thigh but is hoping to feature.

For Sunderland, Sebastian Coates is due to have a series of tests to analyse the thigh injury that saw him withdrawn from the cup tie against Stoke. Though given he's currently fourth choice for the centre-back spot, this shouldn't cause Poyet too many migraines.

Much has been made of Crouch's physical presence this season. This, allied to the cliched note that he has "good feet for a big man" has brought three goals already, though much credit for this return goes to Moses.

When it comes to counter-attacking, the on-loan winger represents an effective out ball. He's quick, positive and can deliver accurate passes into the box, which becomes all the more useful when his target is 198 cm in height. Sunderland will have to be alert to his pace on Wearside, plus the support runs from from the likes of Steven Nzonzi and Marko Arnautovic.

Poyet has been making much noise this week regarding the services of spiky midfielder Lee Cattermole, who came close to signing for Stoke last January. "In transfer windows, it's the best decision I have made," he said. "I've got no doubt about that. I'm sure, with all respect to Stoke and to Catts, he's happier here."

Hughes was left to reflect on his team's first home win of the season following a 1-0 victory over a woeful Newcastle. "The previous two games we'd done OK up to a point, but tonight was about getting the three points and we were able to do that.

"The importance of the first goal is paramount... [It was] a great cross from Victor, that's the service we want to give to Crouch. When we do get him good service, more often than not he converts chances."

The omens are not great for this one. There has been a sending off in four of the previous five fixtures between these two sides, with only six goals scored. Four-goal thriller, then. 2-2.