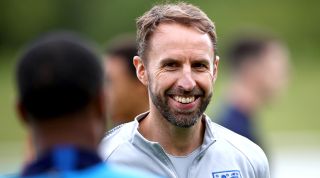 It always promised to be a historic occasion. For Kosovo, it still will be. On Tuesday, St. Mary’s will host its inaugural international against England. It looked likely to be a landmark night for Kyle Walker, the one he would become the 61st member of his country's 50 club; the latest man to bring up a half-century of caps. On Saturday, against Bulgaria, he was due to draw level with Geoff Hurst on 49.

Except he isn’t. Gareth Southgate, a man whose tally of 57 puts him in exalted company alongside Paul Gascoigne and Jimmy Greaves, omitted Walker from a squad that contained three right-backs. One of those three, the uncapped Aaron Wan-Bissaka, had leapfrogged Walker but, when he withdrew because of injury, there was no recall for a man first capped by Fabio Capello.

The diplomatic answer, which Southgate duly gave, references the reality that England only have eight internationals left before he names his Euro 2020 squad. This is an opportunity to look at others. And yet his praise for Wan-Bissaka, Kieran Trippier and Trent Alexander-Arnold felt enough to refute the theory that Walker is simply a rested first choice, told to spare his legs at the start of a season that could stretch into July.

If all amounts to examples of strength in depth for a position where Glen Johnson used to face little competition, Trippier is proof that the banished can be brought back. After the Atletico Madrid man failed to make the Nations League squad, he can also testify to Southgate’s nice-guy ruthlessness.

Trippier and Walker, the two former Tottenham team-mates, started in (officially) England’s most successful team for 28 years. Fourteen months later, each has been dropped. The commendably honest Trippier admitted his form last season was a relevant factor. Walker, however, was terrific in both the Community Shield and Manchester City’s 5-0 win at West Ham, even if his tackling at Bournemouth could have brought a premature departure.

The alternative view is that Walker has played in two semi-finals for England and neither exactly went to plan: Ivan Perisic stole in ahead of him to score Croatia’s equaliser in 2018 while, 12 months later and in an altogether worse display, he scored an own goal against Holland. With Alexander-Arnold then excelling against Switzerland, it scarcely suggested that Walker is inked in to start next summer.

Rather, he has become the latest example that Southgate can be England’s eminently polite hatchet man. Selection used to resemble a closed shop, especially for those at elite clubs and in an era when fewer English players were operating at a high level. If the increase in opportunities for English talent (which Wan-Bissaka and Alexander-Arnold personify) has been a theme, Southgate’s willingness to axe the established and experienced is a common denominator: just ask Joe Hart, Chris Smalling, Gary Cahill or Wayne Rooney. He was also open-minded enough to recall Cahill, albeit as an understudy.

But the contradiction is that the mild-mannered Southgate has shown decisiveness that some of his supposedly harder predecessors lacked. Sam Allardyce considered dropping Rooney and ducked the decision, partly because of a lack of alternative leaders – a purportedly tough talker showing weakness when he said his captain played wherever he wanted to in Slovakia. Capello was the martinet who invariably kept senior figures in his squad and instead took the easier option of axing younger players and smaller names. Steve McClaren tried to look ruthless and botched it, sending the dropped David Beckham an SOS to try to rescue his flailing regime which, to the midfielder’s credit, he made a valiant attempt to do.

RECOMMENDED In defence of Michael Owen: the ex-footballer who just wants to be honest

Sven-Goran Eriksson’s reign became indelibly associated with player power. Once the Swede had arrowed in on a group of high-class club players, preferential treatment felt entrenched. Southgate can be faulted for his loyalty to a semi-fit Harry Kane at times: otherwise, his cold-blooded decisiveness feels a guard against complacency.

The criteria may not be as simple as club or international form – Jesse Lingard’s inclusion surprises some, while Fabian Delph made the Nations League squad after barely featuring for City – but there is the sense that a semi-final was not an end in itself. Clearly, those responsible for taking England there don't have an immunity against omission.

A restlessness, a search for something better, was apparent in last autumn’s switch to 4-3-3 and with the summer dropping of World Cup set-piece sensation Trippier. Now Walker highlights how Southgate can marry civility with brutality.

QUIZ Can you name the 50 players with the most Manchester United appearances under Alex Ferguson?