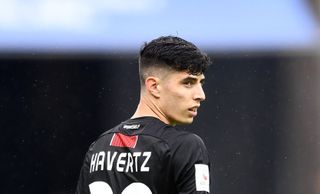 Few players in German football have ever been as highly rated as Bayer Leverkusen’s midfielder and Chelsea target Kai Havertz. Before the club’s German Cup final defeat to Bayern Munich in July, managing director Rudi Voller couldn’t contain his admiration for the 21-year-old.

"We've had many good players through the history of the club at Bayer Leverkusen,” the 1990 World Cup winner beamed. “But Kai Havertz is the best of them all.”

Leverkusen alumni includes the likes of Michael Ballack, Toni Kroos, Bernd Schuster and Ze Roberto. But the kid from Aachen, a small town on the Belgian border, is considered one of the very best, and not only by Voller.

MORE CHELSEA Timo Werner to Chelsea: How will the German forward fit into Frank Lampard's system?

“He reminds me of a young Michael Ballack,” said former Germany and Liverpool midfielder Didi Hammann in May. “He’s just a brilliant player, he’s so flexible, he’s tall, he can hold the ball up. He’s physical and technically very gifted. He’s perfect.”

High praise indeed, but it somehow feels justified in the case of Havertz. He has been outstanding since breaking into Leverkusen’s first team in October 2016, scoring 45 goals and laying on 31 in 148 appearances for his boyhood club. They'd be sensational numbers for any young striker, let alone a midfielder. But it's not only his goalscoring and creativity that set him apart.

Havertz has captained Leverkusen on nine occasions this season, all at the age of just 20, and for the past two seasons has been taking the team’s penalties. His record from the spot would make Frank Lampard blush: taken 13, scored 13. Here is a young player who completely backs himself on the big occasions.

It’s odd, then, that no other clubs are rivalling Chelsea for his signature. There’s a long list of teams in the Premier League and across Europe crying out for a creative, goalscoring midfielder who can still improve.

At a glance, Arsenal, Tottenham, Barcelona and Liverpool could all use a player with his range of skills. Conversely, there’s a case to be made Chelsea actually don’t, given the options they currently have and once you factor in the arrival of Ajax playmaker Hakim Ziyech.

Lampard’s interest might have something to do with the fact Havertz is a player in his own mould. A hardworking, free-scoring midfielder with a great eye for a pass. The Chelsea boss has refused to discuss Havertz, but other managers have talked up those sides of the German's game.

"I think very few coaches wouldn't want to have Kai Havertz in their team," said Bayern coach Hansi Flick ahead of that cup final. "He has developed enormously at Leverkusen. He moves very well between the lines, he is safe on the ball and is good at finding space. He has got a strong goal-scoring instinct at a young age."

No current Chelsea midfielder has scored more than Havertz’s 29 league goals over the past two seasons. Only Ziyech has created more chances, and he’s done that for a better team in a weaker league.

Havertz and Ziyech will likely play together. The Moroccan has always been best deployed on the right wing at Ajax, freeing up space for Havertz behind a lone striker. Add in Christian Pulisic, now settled in English football, on the other side and suddenly you have a world class attacking midfield trio supporting whoever Lampard selects to lead the line.

Anybody wondering how long it might take for Havertz to hit his stride in the Premier League need only listen to Germany manager Jogi Löw’s analysis, back in 2019, after Havertz was invited to train with the national team for the first time.

"I asked myself, after the first time Kai trained with us, whether he could possibly have already been with us for a year or two,” Löw chuckled. “It seemed as if he’d always played with his Germany team-mates. I’ve seen that very, very rarely with a player before.”

Chelsea fans could look forward to seeing the rare, the unpredictable and – with a nod to their now coach and former talisman – a dash of the familiar, should Havertz get his move to west London.