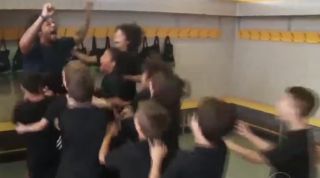 Enzo brilliantly completed the task with Marcelo's Blancos team-mates, as they fluidly combined to get the ball into a laundry basket.

Not to be outdone by his offspring, Marcelo swanned into Enzo's territory - aka Real Madrid's 'Benjamin B' side -  and did the very same challenge with his son's team-mates.

Ignoring a couple of weaker efforts from the little mites that had to be kicked back, the Madrid kids were superb in helping the Brazilian achieve some familial bragging rights.

Now that's out of the way, Marcelo's attention turns to the minor matter of Real Madrid's Champions League final against Liverpool in Kiev on Saturday evening. The Brazilian is hoping his team's experience will help them win their third consecutive Champions League title.

Speaking to reporters on Tuesday, he said: "We've won the last two finals so it may seem something easy to do, but we know that it's not.

"We know how hard it is to go through each training session and each game. It's tough to make it to the final and we are determined to win it."

Just 23 people out of 9,000 'confirmed' turn up to Radja Nainggolan protest at Belgian FA offices