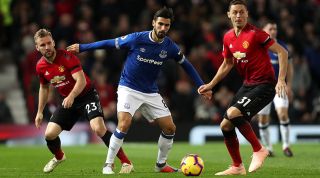 There are three strong candidates for this list at Manchester City. David Silva is finally getting the amount of love his majesty merits, but is still underappreciated. Fernandinho continues to be the midfield rock around whom City’s attackers can all dance.

But it’s Laporte whose form has gone under the radar most. He may not have the physical presence of Virgil van Dijk or have the patriotic goodwill of John Stones or Harry Maguire, but the 24-year-old has been the highest-performing central defender in the Premier League this season. It’s not an exact measurement, but Laporte has been at City since January. His Premier League record when starting: Played 22, Won 20, Drawn 2, Lost 0.

Bizarrely, Laporte has also been overlooked at international level. After some confusion, he has declared for France and was called up to the senior squad in October, but hasn't yet been capped. Didier Deschamps is not easily criticised after the summer’s achievements, but Adil Rami and Mamadou Sakho over him in the last squad? Eesh.

Marco Silva will be keen to stress that Everton’s improvement is a team effort, but Gomes’s arrival in the team has so far produced three wins, a draw at Stamford Bridge and defeat at Old Trafford. He has added composure to central midfield that complements Idrissa Gueye’s terrier spirit perfectly.

Gomes is also a symbol of Silva’s new Everton. He endorsed the signing of six first-team players this summer – Richarlison, Yerry Mina, Lucas Digne, Kurt Zouma, Gomes and Bernard; all were aged between 21 and 25. In the previous two seasons, 10 players had arrived at Everton aged between 26 and 33.

And look at where those players have come from; all but Richarlison from a Champions League club, including Barcelona and Chelsea. Gomes may have struggled to make himself relevant at the Camp Nou, but he was excellent for Valencia before that and gives Everton’s midfield an air of authority that Morgan Schneiderlin and Tom Davies do not.

It’s hard to ignore Wolves’s army of Jorge Mendes clients. Before kick-off, giant screens at both ends of the stadium recount the highlights of an excellent three months in the Premier League. You struggle to go 10 seconds without hearing ‘Moutinho’, ‘Neves’, ‘Jimenez’ or ‘Cavaleiro’. There is no attempt to play down the influence of those who have had their careers mapped out by a third party with friends in Molineux’s high places.

But speak to any Wolves supporter and they will tell you that the club’s best players this season have no Gestifute connections. Conor Coady has been majestic in central defence, but it’s right-back Doherty who has most impressed. Only two full-backs have had more touches in the opposition penalty area and only two have created more chances.

Now 26 having fought for relevance at Wolves and coming out better for the experience, Doherty must surely be considered as Seamus Coleman’s natural heir in the Ireland team. Hopefully Big Mick or Stephen Kenny are fans.

Like Wolves, Watford’s wonderful start to the season has been tempered by recent league defeats. Like Wolves, it’s worth putting the slump into context. For Watford to be 12 points above the bottom three after a third of the season represents significant progress.

They are a team packed full of underrated players who too easily slip out of the mind. Craig Cathcart is a consistent performer in central defence, Roberto Pereyra has been the principal goalscoring threat and Jose Holebas’s energy continues to amaze despite him turning 34 in the summer.

But Capoue deserves more credit than most: former jobbing Tottenham player has transformed into a pressing, working, harrying central midfielder. If Javi Gracia’s success is forged on making life uncomfortable for opponents, Capoue does it better than anyone. Only eight Premier League players have made more tackles, and one has more interceptions. Add the two together – a measurement we can roughly call the ‘Kante scale’ – and two pip Capoue. He’s 27 ahead of any Watford team-mate.

Brighton’s defensive resilience merits being one of the standout stories in the Premier League over the last 14 months. With a back four still primarily comprised of those who got the club promoted, Brighton had the best defensive record in the Premier League’s bottom half last season and have conceded fewer goals than Manchester United in 2018/19.

That’s not solely down to Shane Duffy – far from it – but he is the action man of Chris Hughton’s back line. No Premier League player has made more clearances this season, and Duffy has 66 of those with his head. That’s 12 more than any other player in the division. Oh, and only one player has blocked more shots too.

In the age of passing, ball-playing central defenders, someone with Duffy’s style might seem slightly anachronistic. He can be safe in the knowledge that his manager loves him very much.

QUIZ Can you name the 47 stadiums in English football with a 20,000+ capacity?

Huddersfield’s one-man band, Billing is third for shots and first for dribbles among his team-mates but also third for interceptions and first for tackles. Get you a man who can do both, as they say.

Billing is not the perfect midfielder. There are times when his positional discipline is lacking, and once or twice since promotion he has suffered three or four muted performances in succession.

But at just 22, there are few central midfielders who have come such a long way in such a short space of time. Having joined Town’s academy at the age of 17 in 2013, a senior call-up for Denmark is surely not far away. Nor too should interest from higher-profile clubs – not least as he’s also considered a homegrown player.