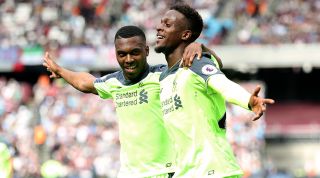 Alexis Sanchez has 23 Premier League goals this season. The last Chilean player to finish as top goalscorer in one of the big five European leagues was Iván Zamorano in La Liga for Real Madrid in 1994/95 (28 goals)

The big talking point:Arsene Wenger’s 19 consecutive Champions League qualifications. The record is seriously under threat now. Arsenal must beat Everton, but they also have to rely on Liverpool dropping points to an already-relegated Middlesbrough. Not a good position to be in.

What will happen: The Europa League. Cue a lot of “never fancied her anyway” from the Arsenal fans, and maybe even a few laboured blogs posts about why this galling failure is a necessary evil. Whatever keeps them warm on those cold Thursday nights.

What won’t happen: Any reassurance for Romelu Lukaku’s suitors. Here’s the problem: Everton are going to want a vast amount of money for Lukaku, meaning that he’s only really available to five or six European clubs. The question then becomes: have the teams operating at that level really seen enough to justify that kind of expenditure? He’s a very capable Premier League forward, but does he translate not just to the Champions League, but to the latter stages of that kind of competition? It’s relevant here, because he has failed to deliver against this kind of side numerous times; not just failed to score, but to do anything of note.

Despite playing his last Premier League game on January 2, Dimitri Payet will end the season as West Ham’s most creative player in the competition this season (74). The next best is Manuel Lanzini with 56 chances created for the Hammers

The big talking point:Next season. This is a party: both teams are safe. Rather than picking out an individual detail from the game itself, the focus is really on what happens next - how Burnley establish themselves at this level, and how West Ham use the money they have available in the summer.

What will happen: Hopefully, some kind of response from West Ham after last weekend. Given how poor some of the sides below them are, it’s damning that Slaven Bilic’s players arguably gave the worst home performance of the season - by any club - during their defeat to Liverpool. It may not have come with any lasting consequences, but it was bad enough from the supporters’ perspective to demand an immediate repayment at Turf Moor.

What won’t happen: Winston Reid won’t make the trip. The West Ham centre-back had a knee operation on Friday morning is now gone until August.

The big talking point:The trophy, guards of honour, and selfies on the pitch. It’s going to bethatkind of day at Stamford Bridge.

What will happen: Do you remember the castle in Game Of Throne with the trapdoor? Sunderland, figuratively, are going to be thrown through that.

What won’t happen: Nobody will be left wondering why these two teams are in the situations they are. Even in party mode, Chelsea are capable of running up a big score against Sunderland and the thought of an apathetic David Moyes team should be enough to worry the Premier League historians. Expect this to be a thoroughly chastening departure.

The big talking point:Hull’s relegation still seems slightly unjust. Their ownership deserves it, of course, but Marco Silva has brought about such positive change in such a short period of time that it’s hard to escape the feel that he deserves more.

What will happen: Probably a Tottenham flourish. With second place secure they have nothing to play for, but Mauricio Pochettino is still haunted by the memory of how his side finished last season. Don’t assume that Spurs’ standard will drop just because of the circumstances - it certainly didn't on Thursday night in their 6-1 trashing of Leicester. They remember that Newcastle game.

What won’t happen: Similarly, don’t expect too much harmony at the KCOM. Silva rightly has appreciation from the crowd, but the guns might well turn on the Allam family like never before; this was an opportunity for the club to advance and the owners have fumbled it. It's a minor miracle that they even stood a chance of survival by last weekend.

11 different English players have made 20+ Premier League appearances for Bournemouth this season. The last Premier League team to do this were Aston Villa in 2000/01 (also 11 players)

The big talking point: Bournemouth could potentially finish eighth if they win this. Look at their squad, look at their ground: that would be a phenomenal achievement in their second season.

What will happen: However, Leicester seem more likely to take the points and climb into the top half at the visitor’s expense – and especially so after Thursday night's humbling loss to Tottenham. End of the season or otherwise, that was an entirely unacceptable – and uncharacteristic – performance: there is never, ever an excuse for losing 6-1 at home, and Craig Shakespeare will presumably spend the next few days taking aim at some individual attitudes.

What won’t happen: Shakespeare made such a strong start after replacing Claudio Ranieri that it's rather escaped people's notice that he's won just two of his last seven Premier League games. Whatever happens on Sunday, we'll have to wait until the new season begins before knowing whether he's a credible long-term option or has just been a short-term antidote.

Liverpool are unbeaten against Middlesbrough in their last 21 league games at Anfield (W15 D6); only against Stoke (32), Nottingham Forest (23) and Notts County (22) are the Reds on a longer current unbeaten at home in the league

The big talking point:The solitary win Liverpool need to take them into the Champions League. In truth, they’ll likely be the beneficiaries of Manchester United and Arsenal's collective failings, but that really doesn’t matter; finishing in the top four would be an excellent platform from which to start their off-season recruitment.

What will happen: How fitting that this final challenge is one Liverpool have struggled with so often this season. At Anfield, against a team they should beat, with all the emphasis on them to be proactive. Fortunately, this Middlesbrough team had their backs broken at Stamford Bridge earlier this week, so their resistance should be fairly mild.

What won’t happen: However, Liverpool are not Chelsea and aren’t anything like as ruthless against these lesser sides. Yes, that’s been repeated many times this season but it’s never been more pertinent: get ahead early or Anfield will start to get awfully edgy.

The big talking point:Jose Mourinho doesn’t need a win, but it really would help. The obfuscating fog has started to lift around Old Trafford and, partly informed by the performance against Southampton on Wednesday, it’s becoming evident that his team aren’t particularly good. When you manage Manchester United and have access to their titanic resources, that long list of tired excuses just will not do.

What will happen: Tedium. Actually, you’d fancy Palace to get something here. United will have eyes on Wednesday's Europa League final and their better players will be sat in the stands, so Sam Allardyce will spy an opportunity. United will be laboured, slow and dull; the visitors will be robust and primed for the counter-attack. It’s worth noting, too, that Wilfried Zaha and Andros Townsend (if both start) will be facing two very awkward full-backs and a defence in general which isn’t blessed with much pace.

What won’t happen: Any climbdown from Mourinho. It’s such a joyless act now. The relentless accusations aimed at referees, the attacking of his own players, the habitual courting of controversy. The assembled journalists at Old Trafford will rightly ask him about United’s league placing and, as sure as the sun rising in the morning, he’ll again take aim at the fixture list, the FA, the Premier League and whoever else is in his line of vision. Most of us will miss club football over the next two months, but we’ll be welcome of the break from this.

Southampton have lost just once in 10 final day home games in the Premier League (W5 D4), a defeat against Manchester United in 2005 which confirmed relegation for Southampton

The big talking point:Managerial security. What are the odds on both Claude Puel and Mark Hughes both surviving the summer? They’re in different situations and have been in their jobs for different amounts of time, but both will be having uncomfortable conversations with their employers once the season finishes.

What will happen: The final game of two seasons which were both decided long ago. Nobody will learn anything, but they’ll get another chance to see the difference between what these sides are and what they should be.

What won’t happen: A home goal. Southampton haven’t scored in any of their last four games at home. With good reason, too: their attacking midfield isn’t creating chances regularly enough and the talented Manolo Gabbiadini has spent most of those four games looking very lonely indeed. Objective A for the summer is to find a cure for that problem.

Paul Clement has won eight of his 18 Premier League games this season as Swansea manager, more than double the number that Francesco Guidolin, Bob Bradley and Alan Curtis won in their 18 games combined this season (3)

The big talking point:Swansea are safe. Well done to Paul Clement and his players, as this last month has been a real triumph. Middlesbrough and Sunderland essentially relegated themselves, but Hull put up a dogged fight and Swansea have had to take points from many awkward situations to guarantee their survival.

What will happen:Hymns and Arias, again and again. The players have earned the reception they’ll receive from their fans and this will be a day to celebrate. What comes next and who stays and goes are matters for Monday morning.

What won’t happen: Not what won’t, rather what shouldn’t: Gylfi Sigurdsson will hopefully think very carefully before leaving the Liberty Stadium. He’ll get offers - that seems certain - but Clement obviously knows how to use him and the team as a whole is set up to amplify his strengths. No player should walk away from tha kind of situation lightly.

This is the first time in Pep Guardiola’s nine-season career as a manager that he’s failed to finish in the top two of the league. He’d previously won the title in seven seasons and finished second once (2011/12 with Barcelona)

The big talking point:City’s tiny chance of falling out of the top four. It would take something bizarre, including a violent swing in goal difference, but Champions League qualification isn’t quite a certainty for Pep Guardiola. A point will do, though, so it should just be a matter of a being professional.

What will happen: Walter Mazzarri will leave Watford after this game. It’s what the Pozzo family do: their philosophy relies on periodic trauma and, potentially, Mazzarri would have left irrespective of what he was able to achieve. There’ll be another new manager appointed in the summer and, in all likelihood, another mini-army of new players arriving shortly after.

What won’t happen: Is this Watford ever likely to change? Probably not. Nobody should overlook what they’ve achieved in staying in the Premier League for a third season, but it’s hard to see how this approach is compatible with true, sustainable growth. Eventually, something more stable is going to have to take its place.