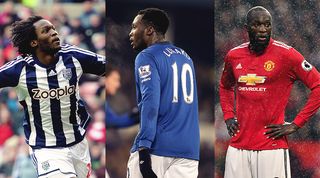 Remember to tweet your scores @FourFourTwo and share with your mates - especially if you're a West Bromwich Albion, Everton or Manchester United fan.

It seems strange to think now that Romelu Lukaku was once a shiny young star of the Premier League, banging in goals for West Brom and exciting crowds across the country.

Now, he's well and truly part of the furniture. The fulcrum of Antonio Conte's Inter Milan revolution, the Belgian is still putting the willies up goalkeepers - only in Italy now.

Since Rom himself turns 27 today, we'd like you to name the clubs that he's scored against - specifically against English opposition.

You've got 12 minutes to get them. Don't be put off by the sheer quantity either - they're mostly against the same few teams.