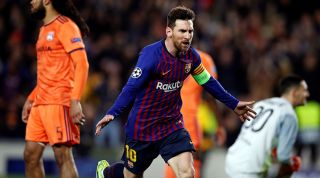 Bastardly pop quiz: according to Transfermarkt, there are only six clubs in the Champions League that Lionel Messi has played against but never scored past. Can you name any of them?*

The rest of these poor saps haven't been so fortunate, ranging from the side that's leaked nine goals in only six meetings with the diminutive genius, to those who've managed a relatively clean escape from little Leo.

The 31-year-old has netted hat-tricks, four-goal hauls and once even five in a game on his way to reaching 108 Champions League goals; the most of all-time but for a certain Portuguese pal of his.

So today we’re quizzing you on the teams Messi has scored past in the Champions League, via goals from penalties, mesmeric runs, free-kicks and (yes!) headers.

Five minutes are on the clock with each club's respective nation, and then we'd like you to share a screenshot of your score with us on Twitter @FourFourTwo – we’ll retweet your efforts if you don’t give answers away, to see how you stack up against everyone else.

QUIZ Can you name the Tottenham and Real Madrid teams from Spurs’ last Champions League game at White Hart Lane?