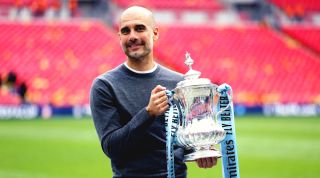 Five minutes on the clock, 28 players to guess - that's 11 that started for each side, plus the three substitutes they each brought on.

NOW TRY Quiz! Can you name every club Didier Drogba scored against for Chelsea?

Sorry Pep - you're not getting your hands on a second consecutive FA Cup trophy.

Senor Guardiola may have lost the Cup semi-final to his pal Mikel Arteta, but tonight, Manchester City dust themselves off and go again - Watford lie in waiting.

We all remember what happened that day. City went beserk, going all-out to knock the poor Hornets for six. Just mere months later, Pep's men were at it again, bettering the FA Cup final scoreline and beating Watford 8-0 - it was the best possible way to recover after losing 3-2 to Norwich City the week prior.

With Watford having just sacked Nigel Pearson and City looking for another bounce back from a nasty defeat, how many do we think they could end up scoring tonight?