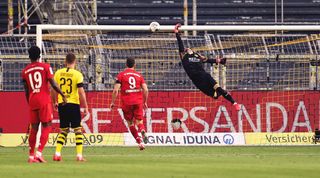 Six minutes on the clock, 50 answers to guess.

Remember to tweet your scores @FourFourTwo and share with your mates - how well do you know the big two in Germany?

In case you missed it, Bayern Munich's winner against rivals Borussia Dortmund was a beautiful lob well worth winning any game.

In fact, it may well have won the title. Bayern are now seven points clear at the top of the Bundesliga and there's not that much longer to go.

It's a common feeling for BVB. Over the last eight years, the Bavarian thorn in their side have managed to pull away from them every single season, smashing them for four and five on occasion - even defeating them in the Champions League final.

We don't mean to rub salt into the wounds, but can you remember the last 50 scorers in Der Klassiker? Clue: most of them belong to the red team...