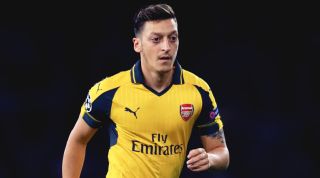 Six minutes on the clock, 25 players to guess.

NOW TRY Quiz! Can you name the 25 highest-scoring Brazilians in Champions League history?

Goalscorers have always been the most appreciated members of a team - but it's only in the last few years that the players setting them up have been given the credit they rightly deserve.

In the last couple of seasons, the Premier League has introduced an award for the player who gives the most assists, thanks to the exploits of the country's best no.10s. This season, it's Kevin De Bruyne leading the way - and he's trying to beat the long-standing record of 20 in a season.

An assist might be the next best thing after scoring a goal - even if is just a five-yard pass before your teammate goes off on a long, mazy run - but how many of the most creative men since 2000 can you name?

A number of the players on this list are the playmakers of their side - some are strikers who just happen to be in the thick of the final third. You've got six minutes...

ARSENAL Was Sol Campbell's move to Arsenal the greatest Premier League transfer ever?