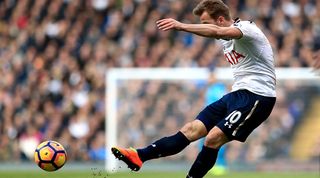 As you’re undoubtedly heartily sick of us telling you if follow our quizzes, a quirk of the fixture list means the ever-present Premier League clubs have played exactly 1,000 games, 26 seasons after England’s top division was rebranded.

We’ve tested you on Manchester United, Arsenal and Chelsea – but Tottenham are an interesting case. Their high player turnover means no player has yet hit 300 Premier League appearances for the club (just don’t call them wheeler-dealers).

However, there’s been an improvement in constancy under Mauricio Pochettino, as evidenced by the fact that 10 of the current Tottenham squad feature in this quiz of their top 100 Premier League performers.

There are 10 minutes on the clock to try to name the Tottenham players who’ve racked up 88 or more Premier League appearances. Let us know your score @FourFourTwo – we’ll retweet the best, if you don’t give answers away. Challenge some friends too please!