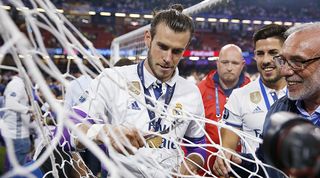 Last season, Gareth Bale became the seventh British footballer to take the field in three (or more) of these showpiece games in the post-1992, Champions League era.

This weekend he'll be hoping to make it a fourth when Real Madrid take on Liverpool in Kiev – only this time, aiming to play more than the paltry 13 minutes he managed in his home city of Cardiff back in 2017.

The overall total currently stands at 67 (with 54 players currently on three final appearances, eight maestros on four, four greedy blighters with five finals and one player having featured in six. Six! He'll be joined by another man this weekend, providing he doesn't fall down a flight of stairs and break something before then.)

We’ve provided you with each player’s total finals, the club(s) they’ve represented in those matches, plus their playing position. All we ask of you is a surname. Then, when you’re finished, tweet us your score @FourFourTwo and we’ll retweet to show what a brainbox/bumpkin you are.

(Note: Adblockers may stop you seeing our quizzes, so you please turn them off. Thanks!)