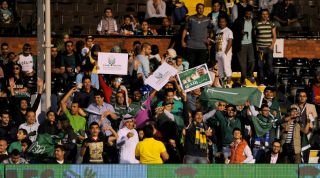 Al Ahli take on Al Batin in the Saudi Pro League, which will be the first game that a woman can watch from inside the King Abdullah Sports City stadium.

Previously women could watch matches on television only. One female was arrested for attending a game in Saudi Arabia back in December 2014.

Arenas in Riyadh, Jeddah and the eastern city of Dammam will have dedicated sections for female fans.

Crown Prince Mohammed bin Salman has been easing restrictions on women in the country since he came into power last June. He made that clear last September by allowing women to attend a Riyadh-based stadium last September to celebrate the country’s national day.

League leaders Al Hilal face Al Ittihad on Saturday. And for 22-year-old Al Hilal fan Ghadah Grrah, she cannot contain her excitement as she is finally able to go and watch them play.

"It can be hard to have to watch your team only on television especially when it is a big game or a final but now my wish is coming true,” she told the Guardian.

"I don’t know how to describe my feelings to you, I have been waiting since I became a fan in 2010 and it is such a pleasure to go to a match for my favourite team in Saudi Arabia.

"I am very excited.”