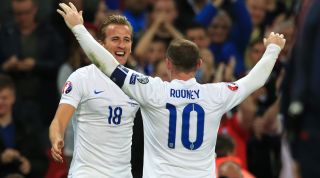 The match against Portugal – a 1-0 win against 10 men, with the result finally achieved after Alli and Kane had come off the pitch – was not a resounding success. So can the Spurs youngsters really be relied upon to bring England success at the Euros?

Yes, they can – as long as they're playing in the right system.

Below is Tottenham's passing network in their convincing 3-0 win over Manchester United in April. The thickness of the lines shows total passes in both directions between players.

All five of the England starters played in this match, with Alli opening the scoring and Rose heavily involved as Spurs primarily attacked down the left.

The network shows that another key player against United was Christian Eriksen, who laid on Alli's opener. Denmark failed to qualify for the Euros, and Eriksen will not be pulling on an England shirt any time soon.

In a good attacking system, though, no one is irreplaceable, and there are players in the current England squad capable of stepping in for Spurs' foreign contingent this summer.

Sterling and Lallana in

FFT's lowdown on Roy's boys in our Euros guide

Raheem Sterling is the most natural replacement for Eriksen. The Manchester City man, whose cross set up England's late goal against Portugal, is the perfect fit in terms of his ability to pass the ball and to take on defenders himself.

The other switch in attacking midfield is Adam Lallana for Erik Lamela. Lallana plays the same role for Liverpool as Lamela plays for Spurs, changing the direction of play at a high tempo.

There remains one unidentified player in the ‘Tottenham/England’ starting XI; replacing Mousa Dembele in central midfield is Roy Hodgson’s most difficult decision. By making Wayne Rooney captain, Hodgson has already committed to having him as part of the team, with the 30-year-old having finished the domestic campaign playing in the engine room for Manchester United.

England vs The Big Boys: a (horrible) history of narrow tournament defeats

Where are they now? Euro 2004's Team of the Tournament

But Rooney is used to being at the centre of the attacking action, and in the Spurs system, the playmaking focus is shifted towards the left attacking midfielder – the position now occupied by Sterling. This makes Jordan Henderson a much better fit in central midfield. The Liverpool style under Jurgen Klopp has much more in common with Spurs this season than either have with Manchester United’s possession-heavy play.

"Systems win you nothing, football players win you games," said boss Hodgson last week. Rooney underlined that point in the FA Cup final when, after Crystal Palace took the lead, he broke out of the position assigned to him by Louis van Gaal, ran past six players and set up Juan Mata for the equaliser.

If Hodgson is looking to combine an effective system with a bit of individual magic, then Spurs plus Rooney could be exactly what England need.