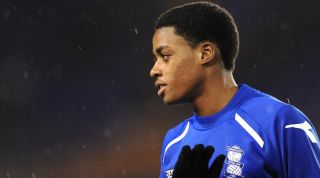 60-second story: Born and bred in Crewe, Clayton soared through the Railwaymen's established youth system and made his debut as a baby-faced 16-year-old. He joins an impressive list to have graduated from Dario Gradi’s academy, which includes former England internationals Dean Ashton and Danny Murphy. Unsurprisingly, he's already been earmarked as a future Three Lions player himself.

Having already made nearly 100 appearances for Crewe and, being capped at international level for the Under-19s, it's been no surprise that the likes of Manchester United and Arsenal have come sniffing in the past. With his contract up in the summer and no news of a fresh one being signed anytime soon, the Cheshire club seem resigned to losing their prized asset.

Did you know? Clayton made a hefty 20 appearances for England's U17s - although even that's some way short of Nathaniel Chalobah's record haul of 34.

60-second story: Bennett became Derby's youngest ever player in October 2011 when he featured against Middlesbrough aged just 15 years and 99 days. The striker came through the Rams' academy at Moor Farm, and began playing for the club's reserves at just 14. With little wonder, the East Midlanders secured his services on a five-year deal soon after.

In fact, the prodigious Ram was so young that he was once withdrawn from Derby's first-team squad for an away fixture against Reading because he had school the following morning. Primarily a centre-forward, Bennett can also be utilised as an effective wide-man thanks to his blistering pace and stamina. Despite only netting twice for the Rams so far, interest has been high in the England U19 international, with both Manchester United and Liverpool reportedly keen on acquiring his signature.

60-second story: Midfielder Wallace was plucked from non-league Lewes by financially-stricken Portsmouth, signing a two-year deal with the south coast club in summer 2011. He wouldn't make his debut until the beginning of last season, though, when the one-time England U19 international made his Pompey debut in a League Cup defeat against Plymouth Argyle.

Following back-to-back loan deals at non-league Farnborough and Whitehawk, Wallace finally got his first-team chance in January 2013 during Pompey’s League One campaign, scoring on his first start for the club in a 3-1 defeat at Hartlepool. Since then the young midfielder has become a pivotal figure in the Fratton Park side's Football League survival bid.

Wallace’s contract is due to expire in the summer, resulting in heavy interest from the Championship. Peterborough had a miserly £200,000 bid rejected in January window, but Portsmouth kept hold of their man. They're confident of keeping it that way too, despite having failed to agree a new deal yet.

Did you know? Wallace scored eight goals in just 11 games when on loan at non-league Whitehawk.

60-second story: Milton Keynes born and raised, Alli made his debut for his hometown club against Cambridge in the FA Cup as a 16-year-old in November 2012. Manager Karl Robinson has hailed him as a “special” talent, and backed it up by installing his young maestro in the Dons' midfield this season.

Standing over 6ft tall and known for his physical style of play, Alli has been naturally compared to Patrick Vieira - which might have something to do with a certain Monsieur Wenger sending scouts to MK Dons' January FA Cup clash against Wigan. Dons boss Robinson knows he'll lose the youngster at some stage in the near future, but has fended off interest from elsewhere by slapping a £5 million price tag on his head in the meantime.

Did you know? Dele’s full name is Bamidele Jermaine Alli.

60-second story: Another local lad come good, 17-year-old winger Gray has been with the St Andrew's club since he was seven. He penned his first professional deal in December, signing a two-and-a-half-year deal. Gray made his first-team debut for the Blues as a substitute in October's 4-0 league win over Millwall, before being handed a full debut just a month later against Charlton.

The youngster recently made his international debut for Noel Blake’s England U19s in a 4-0 win over Belgium. Gray is extremely highly regarded by club boss Clark, and set for a huge future in the West Midlands before the bigger sharks circle. After all, he's already announced himself to one of them, as you can see below.

Did you know? Gray, like Liverpool and England star Daniel Sturridge, used to play for Cadbury Athletic (and yes, they're affiliated).

60-second story: Exeter-born left-back Purrington joined local rivals Plymouth’s youth system aged nine, and signed his first professional contract with the Pilgrims last May after only completing one year of his apprenticeship in the club's academy. On Boxing Day he was gifted a full debut by manager John Sheridan - a 3-2 victory at Oxford - and has gone on to feature regularly since. The 17-year-old has recently been nominated for the League Two Apprentice of the Year award, and looks set to win a call-up to England's U18 squad soon enough.

Purrington’s quick rise through the ranks has not gone unnoticed, with a host of Premier League and Championship clubs rumoured to be tracking the youngster. Argyle won't be keeping hold of him for much longer at this rate.

60-second story: Son of Sunderland manager Gus, Diego has followed in his father’s footsteps. Born in Zaragoza, Poyet Jr. joined Charlton's youth academy in 2006 when he was just 10 years old. The midfielder made his debut for the south London club in January's 3-0 win over Oxford in the FA Cup, was named man of the match in Charlton’s 1-0 win QPR and is now a first-team regular.

Since his father took over at the Stadium of Light there have been customary reports linking him to Sunderland. But Papa Poyet won't be moving for his son anytime soon, so he says: “I’ve seen the rumour about Diego. But why would I want to sign my son? He’s at Charlton, just made his debut, he’s only 18. It’s going really well for him there.” So there.

60-second story: Hartlepool lad Morris played 30 minutes for Boro against Sheffield Wednesday in the final game of last season, but his game time since has been limited to the Teesiders' U21s. The 17-year-old, who is capable of playing in defence or midfield, has been an unused substitute for Aitor Karanka’s side, however, and is fully expected to feature again before the season's end.

The Premier League's big clubs have been tracking Morris since he was 14, demonstrating just how highly rated the young utility man is. Boro aren't panicking over their starlet's future, though, having tied him down to a three-year deal last summer. The attraction of first-team football at the Riverside Stadium should be enough to keep him for a while longer yet.

Did you know? Morris has captained England at U16, U17 and U18 levels. The new Bryan Robson, anyone?

60-second story: There must be something in the water at St Andrew's, as 18-year-old central midfielder Brown becomes the second Birmingham player to make our list. Joining the Blues when he was 10, Brown officially took up a scholarship with the club in 2012 after leaving school. Known for his ball-winning skills and being comfortable in possession, he eventually signed his first professional deal at the end of January. Brown made his debut in a 3-0 defeat at Burnley, but was the Blues' only positive and went on to pick up a man-of-the-match award in his first start for the club - another defeat at home to Yeovil.

His current deal doesn’t end until 2016, but the West Midlands outfit may struggle to hold on to him for that long. He's represented England at U16 and U17 levels and been watched several times by Manchester City’s head of elite development, Patrick Vieira. The two clubs already have an established relationship, and Vieira is keen to utilise it to bring the Brum youngser to the Etihad Stadium.

Did you know? Brown is not to be confused with Watford and former Manchester United youth product Reece Brown - the younger brother of Sunderland's Wes.

60-second story: Walker signed his first professional contract with Hartlepool at the end of July 2013, and was handed his first-team debut a week later after impressing Pools boss Colin Cooper in pre-season. The 17-year-old central midfielder, a Middlesbrough cast-off in his younger days, joined Pools in 2010 and slowly progressed through the youth ranks.

Standing at 6ft 3in, the tall midfielder has made 22 league appearances for Hartlepool this season and been nominated for the League Two Apprentice of the Year Award alongside Purrington. Scouts have begun to descend on Victoria Park, with no doubts over the focus of their attentions.

Did you know? Former Middlesbrough midfielder and current Pools boss Cooper has described Walker as “among the best players he has ever seen at his age”. Watch the video below to see why...