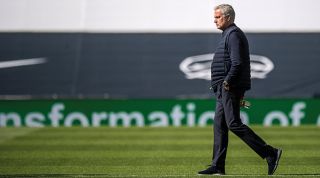 It may have seemed as if the end came quickly for Mauricio Pochettino, but in fact, that crisis was long in the making.

Tottenham’s squad had been allowed to grow stale for some time. Key positions didn’t benefit from the investment they so badly needed. And so, the popular Argentine paid for the inevitable decline with his job.

But his sacking didn’t really solve anything. Instead, it just passed the issues which defeated him on to another manager – and history shows that Jose Mourinho is far less forgiving when he isn’t afforded what he deems to be appropriate financial support.

In this case, however, he is right to demand transfer funds. Matt Doherty and Pierre-Emile Hojbjerg are astute additions, but a centre-half to replace Jan Vertonghen following his departure would be welcome, as would a deputy to Harry Kane.

Whether the money is there remains to be seen. It’s an ideological question, really: how does a manager like Mourinho, whose success has always been underwritten by a large budget, adjust to life at a club where that kind of facility doesn’t exist?

Daniel Levy has spoken publicly about the challenges resulting from the global pandemic, and Spurs are estimated to have lost revenue in the region of £100m as a result. A £175m loan from the Bank of England will alleviate some pressure, but it will cover operating costs rather than squad building.

FEATURE Revealed! Which teams have the easiest – and hardest – starts to the 2020/21 Premier League season?

On the basis of Levy’s explanations thus far, it will have no discernible impact on the team itself. This will be Tottenham’s first season without Champions League football since 2015-16, and though their post-lockdown form was far more promising – five wins and only one defeat, from nine matches – they will want their hiatus to be brief.

But does the necessary leeway even exist to perform the surgery required? More importantly: if it doesn’t, then what will Mourinho’s reaction be to that enforced austerity and how will it impact his relationship with his new employer?

Not for the better, you would suspect. This much history tells us. This has been an awkward embrace from the start. Back in November, Mourinho was unemployed and Spurs were in crisis.

But when the novelty wears off and other options present themselves, just how committed will these two remain to each other? This situation’s difficulty should swiftly provide an answer.