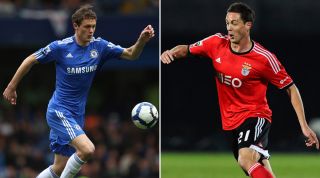 Chelsea fans who keep a close eye on other leagues around Europe can be forgiven for finding it somewhat excruciating: in January 2011, the Blues sold Nemanja Matic for ┬Ż5 million and a part-ex on David Luiz ŌĆō and have since watched him blossom into a top-class midfielder at Benfica. Now theyŌĆÖre grabbing him back for around ┬Ż22m ŌĆō which looks like a song for an individual of his calibre, but can be mathematically confirmed as a lot more than zero. ItŌĆÖs hardly a unique error, mind: FourFourTwo revisits the other rejects that their original clubs went back to pay a pretty penny forŌĆ”

Newcastle-born, Newcastle-bred and Newcastle-mad, the young imp who would become the Premier LeagueŌĆÖs highest ever scorer was rejected at his Toon trial ŌĆō insanely, they played him in goal as they were after a net-minder at the time ŌĆō and instead was spotted by a grateful Southampton scout with a large petrol budget playing for Wallsend Boys Club. After an avalanche of net-busters for Saints and title-winning Blackburn Rovers, his hometown finally came knocking again, with a world-record breaking ┬Ż15m deal led by fellow Geordie Messiah Kevin Keegan in 1996.

Even La MasiaŌĆÖs ruthless genius factory makes bad judgement calls: after bringing Barca-barmy Cesc through the ranks from the age of 10 ŌĆō during which time he racked up Sombrero-fuls of goals ŌĆō the Catalans didnŌĆÖt rate Fabregas highly enough to think that heŌĆÖd be for the first team fodder, instead allowing him to sneak off to the Arsenal academy, where the rest would be history. The 2011 buyback of the midfield maestro would punish the SpaniardsŌĆÖ candle-lit abacus meddlers to the tune of ┬Ż35m.

The most-capped player in Brazil history and the only man ever to have appeared in three World Cup finals wasnŌĆÖt fancied much by his local side Palmeiras as a favela teen, and had to wait until the age of 18 before getting snapped up by Sao Paulo instead. But the Alviverde eventually saw the error of their ways and shelled out for the right-back in 1996. Cafu spent a season there before moving to Roma, where he was nicknamed ŌĆ£The TrainŌĆØ for his relentless consistency (clearly oblivious of the existence of South West Trains).

The lofty full-back represented Real Madrid C (yes, there is such a thing) and Real Madrid B in the early-to-mid 2000s, but found breaking into the A Team a bigger ask. ŌĆ£There were eight defenders in the squad, something had to give,ŌĆØ he sighed, after playing just twice for the seniors and moving to Deportivo La Coruna. But after a term there and two with Liverpool, Los Blancos realised that they had misjudged him, and bought back their versatile stopper for ┬Ż3.5m. HeŌĆÖs now virtually ever-present.

Crouchy took the long way round in playing for Spurs, the side he signed professional forms with as a youth in 1998. Without a senior appearance to his name, he left and turned out for Dulwich Hamlet, IFK Hasseleholm, QPR, Portsmouth, Aston Villa, Norwich, Southampton, Liverpool and Portsmouth again, before finally pulling on a first team Tottenham shirt in 2009, having being purchased for ┬Ż10m by Harry Redknapp.

Currently being ŌĆ£monitoredŌĆØ by Arsenal (whatever that means) tiny Turin-born schemer Giovinco, who is marvellously-monikered Atomic Ant (Formica Atomica), has been engaged in a curious tug-of-love with Juventus for his whole career. After coming through their youth system he was loaned to Empoli and then Parma after only playing sporadically for the Old Lady. Parma soon exercised their right to own 50 per cent of the player (Ōé¼3m), where he played like a trequartista possessed, leading President Tommasso Ghirardi to bluster that he was worth 10 times the amount. Juve then stumped up Ōé¼11m to buy the 50 per cent back ŌĆō enough to bring him home. Half mad.

Another one who snuck through his birthplaceŌĆÖs youth system and had to go elsewhere to prove himself: Reus, now arguably Borussia DortmundŌĆÖs finest player, wasnŌĆÖt fancied as a youngster and instead went to kick around in the 3. Liga with Rot Weiss Ahlen. Winning a transfer to Borussia Monchengladbach as a result of his neat wing play and neater haircut, he eventually ended up heading back to his BVB roots with a Ōé¼17m deal in 2012.

The diminutive Scouse left-back was released twice by Everton ŌĆō at 12 he was let go from the club along with Joey Barton and Phil Jagielka. ŌĆ£It was a massive blow,ŌĆØ said Baines, who has admitted that he struggled with confidence later in his career as a result. Rejected, he dabbled in Sunday league football instead until the age of 15 ŌĆō┬Ābefore Wolves and Wigan both offered him lifelines. The mistake would eventually cost EvertonŌĆÖs calculator-crunchers ┬Ż6m in July 2007.