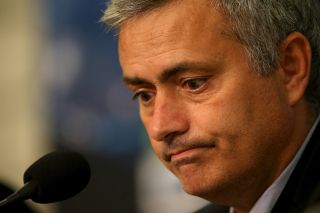 Should we make Mourinho's threat an opportunity?

Jose Mourinho may not follow through on his threat to play Chelsea's Under-21 side in the Capital One Cup game at Arsenal, but maybe he should be forced to. Not because the boss's braggadocio should be backed up with action, but because it would be good for The Kids - and the cup.

Fittingly enough, it's 18 years since Manchester United started the trend of loading League Cup teams with promising youth, and although York won 3-0 at Old Trafford, it was a valuable lesson for home players including David Beckham, Phil Neville, Lee Sharpe and Ryan Giggs.

Since then it has become half-expected for the big clubs (you know who you are) to pick youthful teams in the League Cup; Arsenal have made a point of it, and most top-flight sides have sent out a "much-changed team" at some point or other. Meanwhile, as the Academy system has started to produce dozens of players looking for regular games – Chelsea currently have 26 youngsters out on loan – there's not enough first-team football to go round.

So why not switch the devaluation of a proud old cup into a celebration of youth? The Professional Development League and UEFA Youth League show that interest in player development is increasing. Making the League Cup U21-only for teams in Europe - or even arguably the Premier League - would give those players guaranteed exposure in a senior cup, managers less excuse for fixture congestion and supporters a genuine reason to get behind the future of their teams.

Will the real Spurs fans please stand up?

Andre Villas-Boas seems to have stirred up controversy with his complaint about Spurs' support, or lack thereof, from the stands on Sunday. Notwithstanding the old note that we're all consumers rather than fans these days, his unspun quote seems somewhat more reasonable: "We need people to be patient and support the players and give them the extra energy to go through and not the negative energy."

It will be interesting to note the reaction at White Hart Lane on Wednesday as Spurs face Hull again – although both sides will presumably be much-changed. Not that we're expecting badly-daubed bedsheets bearing anti-AVB slogans, but because the Spurs fans' 1882 movement are hoping to bring some Ultra-style support to the League Cup.

The 1882 folks, in case you hadn't heard, are dedicated to bringing back old-style fanaticism from the days when “how loud you sing and how passionate you became wasn’t dependent on how well the team was playing”. Songs are sung, shoes waved in the air, fun is had and specific games are targeted for fans to come together and bellow their support.

Having done this sort of thing at friendlies and U21 games, 1882 are getting together against Hull and next week's Europa League game against Sheriff. Following on from Manchester United's "singing section" last week, it's intriguing and heartening to see people getting together and supporting their team. Isn't it, AVB?

Could two top-flight managers lose their jobs this week?

However, poor results in the League Cup could double the dismissal rate within days – with the axe hanging over two men you wouldn't have expected in the summer to be facing the chop so soon.

Martin Jol's Fulham are a curate's egg. Last season they only finished three points outside the top half, and his summer signings – proven goalscorer Darren Bent, mercurial matchwinner Adel Taarabt, midfield general Scott Parker and international goalkeeper Maarten Stekelenburg – should have seen them kicking on and matching the top-ten finishes they achieved in 2009, 2011 and 2012.

Instead, they've been woeful just about all season (bar the odd wonder goal) and tonight face a very difficult trip to Leicester, second in the Championship and brimming with all the confidence the Cottagers don't have. It's easy to imagine Fulham losing the match and the manager, should Shahid Khan decide he no longer believes in the boss he inherited.

On Wednesday, Chris Hughton takes his Norwich team to Old Trafford. Hughton, too, has had underwhelming results from his new signings; the Canaries' chequebook got a hammering this summer but while Leroy Fer and Nathan Redmond have shown promise, new strikers Ricky van Wolfswinkel, Gary Hooper and Johan Elmander haven't overly troubled the scorers.

Norwich's problems were obvious on Saturday against Cardiff. The Canaries piled up 31 shots, 10 on target, but couldn't score and Hughton was barracked with the old terrace standby "You don't know what you're doing".

The board have stood by their manager after racial abuse in the shallow end of the internet, but they may find it more difficult to do so if an expensively-assembled team in the drop zone get the walloping that the frustrated champions have been threatening to deliver.