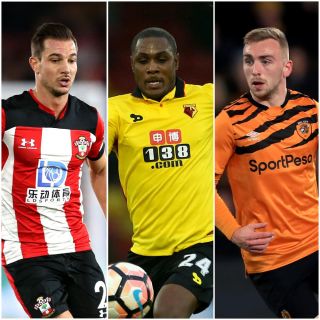 As the January transfer window closed at 2300 GMT, Premier League clubs scrambled to complete their business before the deadline.

Manchester United pulled off a loan deal for striker Odion Ighalo with time running out while West Ham also left it late before confirming the capture of Hull forward Jarrod Bowen.

Here, the PA news agency takes a look at five of the best deals involving Premier League clubs on Friday.

Manchester United officially confirmed the signing of Odion Ighalo just after midnight, the former Watford striker joining on loan from Shanghai Shenhua until the end of the season.

The Red Devils boss did not expect any new faces to arrive when facing the media on Friday morning, but the club went on to seal a shock deal for Ighalo, who grew up as a United fan idolising Dwight Yorke and Andrew Cole

Solskjaer said of the 30-year-old Nigeria international: “Odion is an experienced player. He will come in and give us an option of a different type of centre-forward for the short spell he’s staying with us.”

It took until 2323 GMT before West Ham chairman David Gold announced on social media that the club had completed the signing of Hull striker Jarrod Bowen.

A deal for Bowen, understood to be around £20million, had been on the cards for most of the day and the 23-year-old eventually put pen to paper on a five-and-a-half year deal at the London Stadium.

Bowen has scored 17 times in all competitions this season for Championship side Hull and will be expected to produce the goals to help keep West Ham in the Premier League.

David Moyes’ side are currently outside the relegation places on goal difference after three defeats and a draw in their last four league games.

Arsenal announced the signing of Portugal defender Cedric Soares on loan from Southampton until the end of the season.

The 28-year-old will be out of contract in the summer, and Saints boss Ralph Hasenhuttl had already brought in some cover after Kyle Walker-Peters joined on loan from Tottenham.

Soares described his move to Arsenal as “a dream come true”, having previously been close to joining the London club.

Gunners’ fans, though, will have to wait to see their latest arrival in action, as Soares is currently recovering from a knee problem.

Arsenal had also completed a deal for Spanish centre-back Pablo Mari, who has joined from Flamengo on an initial loan with the option to make the transfer permanent in the summer.

The full story as @Luke_Matheson41 arrives from @officiallydale before returning to Spotland on loan for the remainder of the 2019/20 campaign.— Wolves (@Wolves) January 31, 2020

Wolves signed teenager Luke Matheson from Rochdale, although the defender will remain on loan at the League One club for the rest of the season.

The 17-year-old, who came through the academy at Dale, underwent a medical at Wolves’ training ground on Friday ahead of a deal that is thought to be worth around £1million.

Matheson became the youngest player in Rochdale’s history when he made his debut at the age of 15 years and 336 days and hit the headlines by scoring the equaliser in Dale’s Carabao Cup defeat to Manchester United at Old Trafford in September.

The full-back has been at Rochdale since the age of eight and signed his first professional contract in October, just weeks after turning 17.

Sheffield United continued their January dealings as Dutch striker Richairo Zivkovic arrived on loan until the end of the season.

Blades boss Chris Wilder had already bolstered the squad with a club-record signing of midfielder Sander Berge from Genk.

Former Holland Under-21 international Zivkovic, 23,  made the switch from Chinese club Changchun Yatai and could complete a permanent transfer in the summer.

Greece defender Panos Retsos also arrived at Bramall Lane from Bayer Leverkusen on an initial deal until the end of the season.