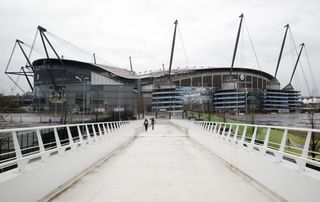 Storm Ciara disrupted an already reduced Premier League programme as Manchester City’s game with West Ham was postponed, but three other fixtures did go ahead while the rest of the division enjoyed a mid-season break.

Sheffield United fought back from a goal down to beat Bournemouth, Everton’s impressive form continued with victory over Crystal Palace, and Brighton and Watford played out a 1-1 draw at the Amex.

Here, the PA news agency takes a look at what we learned from the latest round of Premier League fixtures.

Storm Ciara could cause scheduling headache

City’s clash with West Ham was called off due to “extreme and escalating weather conditions” caused by Storm Ciara. An announcement at 11.15am on Sunday confirmed the match at the Etihad Stadium, which was due to kick-off at 4.30pm, would not take place. It will be rearranged in due course, but both clubs are free next weekend as part of their scheduled mid-season break. With City still in the Carabao Cup, FA Cup and Champions League, they have little wriggle room, unless the match is pencilled in for March 10/11 or a midweek in April, depending on their European commitments.

Carlo’s at the wheel

When Carlo Ancelotti took over at Everton, the Toffees were only four points above the relegation zone and nine off Sheffield United in fifth position. It is fair to say the Italian has had an instant impact and fans in the blue half of Merseyside are beginning to dream again. A 3-1 win over Crystal Palace on Saturday has Ancelotti’s men within touching distance of a Europa League berth, which is in stark contrast to the mood under Marco Silva. Everton are the form side in the division along with leaders Liverpool since their change in the hot seat, and it has helped improve the atmosphere at Goodison Park.

🗣 "Defensively the goals were disappointing, the goals were sloppy and we’re not normally like that."#CPFC— Crystal Palace F.C. (@CPFC) February 9, 2020

Back-to-back wins for Crystal Palace saw them in contention for a European spot at the start of December, but their form since has been poor. Roy Hodgson’s team are yet to triumph in 2020 and have just one victory from their last 11 Premier League fixtures. Now they are just six points above the bottom three and fans are worried they are sleepwalking into another relegation battle. With goals hard to come by at Selhurst Park and no clean sheet during the past two months, the Eagles have problems to solve during this mid-season break.

Jordan Pickford has been England’s first-choice goalkeeper for the last two years, but with mistakes creeping into his game, there is more scrutiny on his position than ever. Gareth Southgate was in attendance at Goodison Park on Saturday to watch his number one make an excellent save to deny Christian Benteke, but Pickford also let a weak shot from the Crystal Palace forward squirm under his body. It was another gaffe from Pickford and, with Sheffield United’s on-loan goalkeeper Dean Henderson again impressing in their Sunday win against Bournemouth, Southgate may be left with a big decision next month when the next round of international fixtures occur.

Many expected Chris Wilder’s side to burn out during the second half of the campaign, but they are showing no such signs yet. After a stunning start to life in the Premier League, the Blades lost three of their six matches in the festive period and start of January. But back-to-back victories have moved them above Tottenham again and this follows a strong transfer window last month. Goals by Billy Sharp and John Lundstram saw off Bournemouth on Sunday and secured a 10th league victory this season.