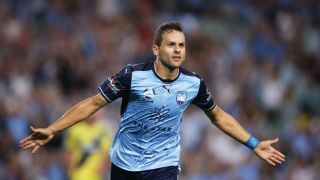 Bobo headed his 16th goal of the season to salvage a 1-1 draw for Sydney FC against Central Coast Mariners – a result that increased their advantage at the top of the A-League.

Graham Arnold's men went behind in the seventh minute after goalkeeper Andrew Redmayne clumsily brought down Kwabena Appiah-Kubi and he was unable to keep out Blake Powell's spot kick.

Sydney's leveller arrived from a familiar source after the hour when Adrian Mierzejewski stood up a cross from the right corner and Bobo nodded past Ben Kennedy.

The reigning champions and premiers are seven points clear at the summit after nearest challengers Newcastle Jets suffered a surprise 3-2 defeat at home to bottom club Wellington Phoenix.

Bobo scores his 16th goal this season!Can anyone catch him in the Golden Boot race?: January 20, 2018

The visitors scored twice in eight minutes either side of the half hour through Matija Ljujic and Daniel Mullen.

Andrew Nabbout pulled a goal back but Roy Krishna steered home a fine third for the Phoenix before Dimitri Petratos' penalty set up a grandstand finish.