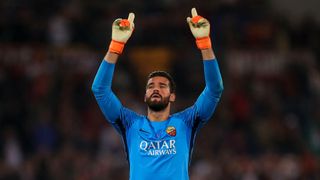 Liverpool have made Brazil international Alisson the most expensive goalkeeper of all time after paying Roma up to €72.5million for his services, and statistics suggest he will be a significant upgrade on Simon Mignolet and Loris Karius.

The goalkeeping position has been a problematic area for a while for Liverpool, with neither Mignolet nor Karius convincing in the last few years.

Mignolet, who was signed in 2013, lost his place as first choice to Karius last season after some high-profile errors, but the German was not much of an improvement.

Karius looked similarly susceptible to a costly mistake and produced a howler in the Champions League final, throwing the ball right to Karim Benzema, who got in the way and diverted the ball into the goal as Real Madrid went on to win 3-1.

Alisson has garnered himself a strong reputation at Roma despite being first choice between the posts for just one season, and, according to Opta data, Liverpool fans have every reason to expect an instant improvement following the 25-year-old's signing.

109 – The Brazilian made a total of 109 saves in the league with Roma. By comparison, Karius produced 31 and Mignolet made 36. Altogether they are still some way behind Alisson.

79.3 – Not only was Alisson's record of 109 saves impressive, his save percentage of 79.3 per cent was too. When highlighted next to Karius (68.9 per cent) and Mignolet (59.3 per cent), Liverpool will surely notice an improvement.

0 – Mignolet (three) and Karius (two) made five errors leading to goals between them in the Premier League last term. Alisson was never adjudged to be at fault for goal in Serie A.

118.9 – Alisson's record of 118.9 minutes per goal conceded in Serie A last year is not quite as good as what Karius managed (122.1 minutes per goal). But the German's figures are somewhat distorted by the fact he played 18 fewer league games than the former Internacional man.

8 - Alisson conceded 28 league goals last season (excl. OGs), but based on Opta xG data for the shots on target he's faced, the average goalkeeper would've been expected to concede 36 goals. This was the biggest differential by a Serie A goalkeeper in 2017-18 (8). Coveted. July 17, 2018