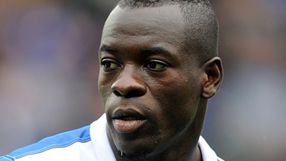 "Samba was with us for almost the whole season before suddenly this deal comes up with this English club," Hiddink told reporters at Anzhi's training camp on Wednesday.

"Yesterday Samba just left the team and went to England. Everything happened so fast, we couldn't even say goodbye to each other.

"The situation is not good for us. He started the pre-season training with us but then he began to contact the English despite the fact he is still under contract with our club. Tomorrow, I hope, we'll find out that's going on."

Samba, who joined wealthy Anzhi from relegated Blackburn Rovers for a reported 10 million pounds last February, was close to signing with QPR for about the same sum, according to media reports.

"His family lives in England, his kids go to school there and his family wants him to be close to them," Tkachenko, a close friend of Anzhi's billionaire owner Suleiman Kerimov, was quoted as saying by local media.

Samba has also suffered from a racial abuse while in Russia.

Last March, he had a banana thrown at him from a VIP box at the end of a league match against Lokomotiv Moscow.