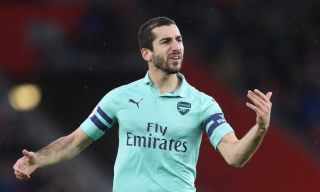 Henrikh Mkhitaryan has left Arsenal to join Roma on a permanent deal.

The Armenia midfielder had his contract with the Gunners terminated by mutual consent, allowing him to join the Serie A club on a free transfer.

A statement from the Gunners read: “Everyone at Arsenal thanks Micki for his contribution to the club and wishes him all the best for his future with Roma.”

He scored nine goals and contributed five assists in 22 Serie A appearances during the 2019-20 campaign.

That deal was initially due to expire at the end of June but the clubs agreed a short-term extension to cover the end of the coronavirus-hit season.

The 31-year-old moved to Arsenal from Manchester United in January 2018 as part of the swap deal that saw Alexis Sanchez head to to Old Trafford. He played 59 times for the Gunners, scoring nine goals.

He wrote on Twitter: “I‘m delighted to announce that I’ve permanently joined the #giallorossi.

“I‘d like to thank @Arsenal, its personnel & the millions of #gunners all whom supported me over the past 1,5Y. A special thanks to A. Wenger for having brought me to the club and for his trust in me.”