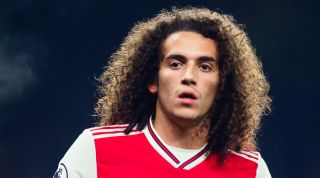 Matteo Guendouzi's transfer saga at Arsenal looks like it's coming to an end, with Bundesliga club Hertha Berlin swooping for the highly-rated midfielder.

Mikel Arteta has had a strained relationship with his French talent over the last months, as disciplinary issues have been regularly leaked to the press. The last time that Guendouzi actually featured for Arsenal was the second match after lockdown against Brighton and Hove Albion where confrontations with Neal Maupay overshadowed the Gunners' performance.

Arsenal have been looking for takers for the Frenchman all summer long. Paris Saint-Germain were said to be interested in a player-swap, while Atletico Madrid entertained a deal before signing Lucas Torreira on loan.

Now, Hertha Berlin look set to move for the player.

Hertha have been busy in 2020, signing the likes of Matheus Cunha from RB Leipzig, Lucas Tousart from Lyon and Krzysztof Piatek from AC Milan. The club were interested in Granit Xhaka, following his falling out with Arsenal last season, too.

Guendouzi's loan move represents a chance of redemption for the youngster. Although he would have hoped to join a much bigger club, the Bundesliga could well be invaluable for his development.

Arsenal may well then sell Guendouzi next summer or reintegrate him into their plans as they have with Mohamed Elneny. Arteta has already stated that he wishes to give players a second chance at the start of every season.

Marseille were said to be interested in Guendouzi late in this window and may well make a late swoop for the player.