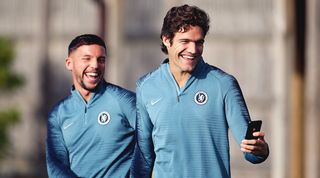 The focus is on the £1 billion spent during a pandemic and who it has not bought. As the transfer window closes, the expenditure feels excessive but the defining deals include some that have not happened: Jadon Sancho to Manchester United, for instance.

And yet there is a different sort of transfer that did not materialise, and it is a type the elite clubs required for very different reasons. Arrivals can be eye-catching but the departures lounges have been packed, only with a distinct shortage of destinations for the discarded. Squads will be clogged up by the unwanted (indeed, some may not even figure in the 25-man lists of senior players that have to be submitted to the Premier League), portions of the wage bills devoted to those who are not playing.

To a certain extent, that is always the case. Some – Marcos Rojo and Danny Drinkwater, for instance – would surely have remained obdurately on the books even if the footballing and global economies were in the rudest of health, seemingly permanent testament to poor recruitment.

Yet, like many a trend, it is exacerbated by the current crisis. Shifting those surplus to requirements becomes harder when there is a lack of money, especially among many in the French, Spanish, German and Italian leagues, to pay the transfer fees and wages required. This is not a seller’s market; not when it is apparent clubs are desperate to sell.

The top range of the market has survived: there will always be interest in Kai Havertz and Timo Werner, or Sancho, were he priced more affordably. The middle of the market has suffered more when there is the perception of damaged goods or when the costs – salaries in particular – feel too great. They have offered the wrong sort of continuity.

Consider the elite clubs. United still own Phil Jones, Jesse Lingard, Diogo Dalot and Rojo. Liverpool might have sold Rhian Brewster because there were no takers for Divock Origi. Manchester City still have John Stones (and, while it was an expensive part-exchange, may be congratulating themselves for finding a way to get Nicolas Otamendi off the books). Tottenham Hotspur look lumbered with Serge Aurier and Danny Rose, with the latter’s diminished status signified when he was stripped of his squad number.

MORE RICHARD JOLLY What will become of Kepa Arrizabalaga?

Chelsea have stockpiled players for years but their spending spree has made it more necessary that some leave. Yet Marcos Alonso, Emerson Palmieri, Tiemoue Bakayoko, Marco van Ginkel, Victor Moses, Kepa Arrizabalaga and Drinkwater are all still there. Arsenal obviously hoped to fund their buying by selling, and probably recognised it was always unlikely that anyone would take on Mesut Ozil’s contract, but Matteo Guendouzi and Sokratis Papastathopoulos remain resolutely unsigned.

Nor is it a problem confined to the big six. Everton can see their transfer-market missteps on a daily basis: Yannick Bolasie, Sandro Ramirez, Cenk Tosun, Theo Walcott, Alex Iwobi and Gylfi Sigurdsson can all be found at Finch Farm. West Ham United were criticised, not least by their own captain, for selling Grady Diangana, but it was in part because Felipe Anderson and Jack Wilshere attracted rather fewer offers.

As captain of this football club I’m gutted, angry and sad that Grady has left, great kid with a great future!!!!! https://t.co/oNPPEp8Pt6September 4, 2020

That is not to say all would have found suitors in another summer. Some would not. Indeed, many were available last year and stayed due to a lack of interest. But some would surely have gone in a normal market and, even if a few are offloaded at the last minute, it is probably with their wages heavily subsidised or when they are given away.

This was not the design, but clubs’ financial projections were based on a different market; it is fairer to fault them for bad buys, as most of the superfluous are, rather than a lack of pandemic planning. But as they assess the men they are stuck with for a further three months, they are both paying for past errors and the new realities of these times. The footballing deadwood are further casualties of 2020.